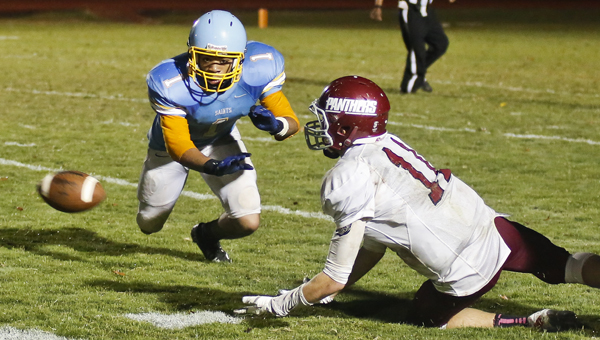 “Brandon Hatcher was able to get in there and make some big runs for us,” Selma head coach Leroy Miles said. “We’re a different team with him in the backfield, because he’s fast, he’s strong, and he’s big, and it’s tough to stop him.”

Selma went into halftime with a 14-0 lead over Brookwood, despite a few penalties.

“We made some adjustments at half time that was key for us,” Miles said. “[We were] able to run the football on them well early in the game, and to go into half time 14-0 and get the ball in the second half, I thought we had the momentum.”

Miles said playing for the homecoming crowd was exciting for the kids, and he could tell they played hard.

“The crowd was just outstanding, and I think the kids played well for them,” Miles said. “It’s a huge win for us. It’s a region win.”

The win put the Saints at 5-2 on the season,

“Brookwood was a good team, they came in and they played hard,” Miles said. “We were able to take advantage of some things they were doing, with Hatcher in the back field, and it paid off for us.”

Selma did have some turnovers, along with penalties, and Miles said they definitely have some things to work on before their next game.

“We just made a lot of mistakes and we didn’t execute on plays. They’ve got a good defense and they’ve got a good team, coach Miles does a great job with them,” Bush said. “They got the best of it tonight and we’ve got to get better.”

There were three touchdowns were scored in the last minute of the game, and two of them belonged to Brookwood.

“It’s always important not to give up and not to quit,” Bush said. “Adversity builds character, and we built some character tonight.”