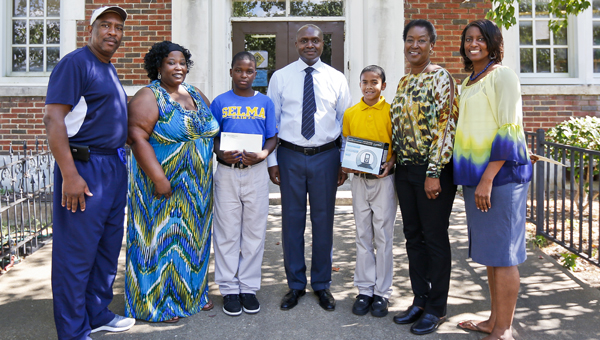 From left, Michael Johnson, Lytasha Smith, Corey Smith Jr., Major W. Burrell, Michael Evans Jr., Aurelia Evans Craig and Kesia Smith pose for a photo in front of the School of Discovery. Smith and Evans Jr. were chosen at random for their perfect attendance and awarded prizes for their dedication to school.–Alaina Denean

Attendance in Alabama schools is not where the State Department of Education would like it be. As a whole, Alabama schools reported more than 7 million absences for 2013-2014 academic year.

To turn the attendance numbers around, the School of Discovery decided to award students who have perfect attendance.

“[We] brainstormed what could we do in order to motivate our kids to come to school and to be regular attendees, and we decided we need to have some type of award system,” said Major W. Burrell, principal at the School of Discovery.

Burrell said encouraging students to come to school is critical in how they will perceive education later in life.

“It is important because research shows and demonstrates that if kids are at school, and they are present at school on a consistent basis, then chances are they will learn to love school and appreciate school and have a positive outlook,” Burrell said.

For the month of September, the names of the 100 students at the School of Discovery who had perfect attendance were put into a hat, and two names were drawn at random.

The students and their parents received different prizes donated by sponsors. The sponsor for the month of September was Michael Johnson, Selma City Council member for Ward 8.

One of the two students who had their name drawn, Michael Evans Jr., said he was really excited to be chosen.

Evans said that coming to school everyday and being on time is important to him.

“I want to be an architect when I grow up,” Evans said. “And I want to accomplish that dream.”

Evans mother, Aurelia Evans Craig, was also happy for him saying, “I’m very excited that he won the prize, and it’s very important for him to be in school so that he can learn and advance.”

The other student being recognized for his perfect attendance was Corey Smith Jr.

“I’m very excited and happy and glad that I won,” Smith said. “[Attendance is] important to me, because I get to come to school and learn.”

Smith’s mother, Lytasha Smith, said she was also excited that her son had been chosen.

“I’m just happy he got perfect attendance, and it’s very important that he be here every day,” Lytasha said.

The school will be recognize students with perfect attendance each month the rest of the school year.

School counselor Kesia Smith said she would like to challenge all businesses, organizations, sororities and fraternities to make a prize donation, in hopes that they will be able to reward more than two students each month for their perfect attendance.

Tammy Barnes is from Illinois but in Selma this week running games at the Central Alabama Fair.. The fair continues... read more