West Alabama legal professionals had the chance to momentarily escape the stress of work and enjoy each other’s company Thursday at the West Central Alabama Pro Bono Celebration. 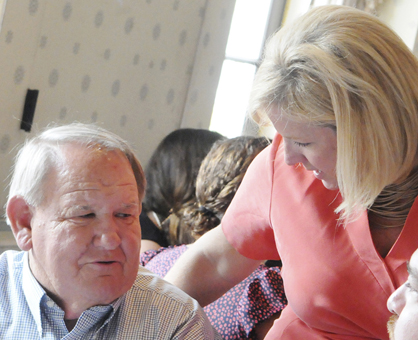 Jana Garner, right, with Reeves & Stewart,
P. C., speaks with guests Thursday at the West Central Alabama Pro Bono Celebration at the St. James Hotel. The celebration recognizes those in the legal profession who have donated their time and advice to those who would not have been able to afford it otherwise.–Sarah Robinson

Pro Bono Month highlights the work of legal professionals who have donated their time and legal advice at no charge to those who normally cannot afford legal assistance.

“I think [pro bono] is necessary for our own growth and development not to simply take from a community but to actually give something back,” said Julia Weller, the court clerk for the Alabama Supreme Court.

Weller was one of many legal representatives who spoke at the Thursday ceremony, which began with a light lunch and concluded with a cocktail party.

“We have such esteemed judges and guest speakers,” said Jana Garner, an attorney with Reeves & Stewart, P.C. “It’s a privilege to have those who are willing to come and spend their time in Selma and Dallas County.”

Pro Bono month is also designed to educate the general public about pro bono efforts, according to Alabama State bar.

The group reported more than 4,500 attorneys in Alabama are enrolled in pro bono programs statewide.

Cassandra Adams, the chair of the Alabama State Bar Pro Bono Task Force, told her colleagues she recognizes the sacrifice that comes with their occupation and appreciates their willingness to dedicate their expertise at no charge.

“I’m here to say thank you and applaud you for your efforts and encourage you to keep on,” Adams said.

“I also offer a challenge to pass those ethics and practices on to the young attorneys.”