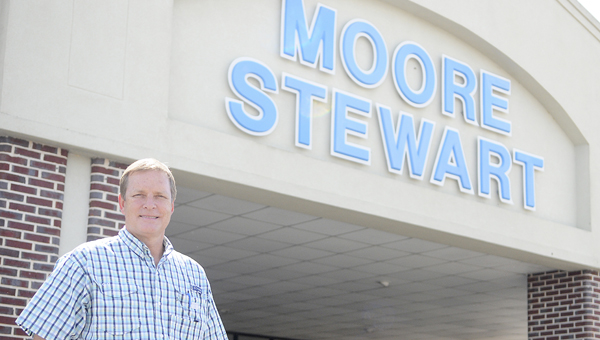 Todd Stewart and Moore-Stewart Ford are celebrating their 20th anniversary in Selma this week.–Daniel Evans

When Stewart gave up a job that had him flying to Chicago three nights a week to run Moore-Stewart Ford, he said he had a lot to learn, but fair business practices have always been at the dealership’s forefront.

“We’re fair, honest and straight, and we aren’t going to lie, cheat and steal,” Stewart said. “We are going to do it the right way, and that’s why we’ve been allowed to survive for 20 years.”

Looking back, it hasn’t always been easy. Stewart has worked the dealership through some great times and some tough ones — like the Great Recession in 2008.

“It was way harder, way tougher, way worse than we ever projected [when we first opened], but it has also been way better than we ever thought too,” Stewart said.

When the dealership first opened its doors, Stewart was trying to run every department, but he found out quickly the business couldn’t be successful that way.

“For the first two or three years, Jon and I tried to micromanage each department, and we failed miserably at it,” Stewart said. “It took us three years that we had to let go and let the managers be responsible for what they could control and reward them if they do a good job.”

Larry Nichols, the dealership’s service manager, has been along for the ride for 14 years, but he said things aren’t very different from the day he first started.

“It’s exciting to see the business grow and continue to grow and prosper,” Nichols said.  “We are doing the things we were doing then to get us to where we are at, and we will continue to do things that made us successful to start with.”

“After people have traded with you, and you are straight with them and you treat them fair, they are going to want to come back and do business with you,” Stewart said.