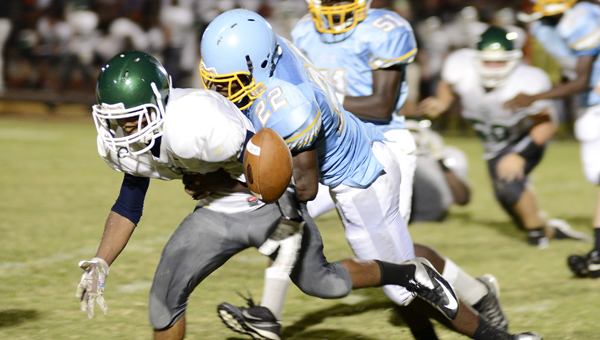 The ball pops out of the hands of Dallas County running back Calvin Starks Jr., left, after he was hit by Selma linebacker Quintz Blevins in a game earlier this year. Hornets’ head coach Marty Smith said turnovers will be one of the keys for his team this week against Central Tuscaloosa. –File Photo

Dallas County has some work to do if it hopes to make the playoffs for the first time since 2004, but a win Friday night against Central Tuscaloosa (3-2) would be a big step in the right direction.

The Hornets put themselves in the playoff conversation with a region win over Sumter Central two weeks ago, Dallas County’s first region win since 2010. Friday night against Central Tuscaloosa the Hornets get a chance to make it two in a row.

“We know the opportunity is at hand, obviously with the next four region games with Central, Wilcox, Calera and Demopolis,” Dallas County head coach Marty Smith said. “But, in order to get where we want to go we have to take care of the first region game first and that’s Central.”

The Falcons have a high flying offense that scored 50 points on Wilcox Central and 40 on Paul Bryant the last two weeks. Smith said it all starts with the quarterback Tyler Bell for the Falcons, who is elusive and can cause problems if he’s able to get outside the pocket.

Central Tuscaloosa also has one of the state’s top prospects in offensive lineman Lester Cotton, who is committed to Alabama.

“They are going to line up and run behind him and we know that,” Smith said.

The Hornets will be without their own star offensive lineman in Southern Mississippi commitment Lowell Furlow, who is out for the rest of the year with a knee injury. Furlow had surgery on his knee Tuesday.

Without Furlow, the Hornets will try to get their offense going against a Falcons’ defense Smith called the fastest Dallas County has seen this year.

The Hornets scored 35 points in their win over Sumter Central, but have averaged under 12 points per game in the other four games this year.

Smith said a large reason for that are turnovers, which have plagued the Hornets at times this season. Against Bibb County three weeks ago, three straight Dallas County drives ended in turnovers.

“They now see the importance where if we don’t turn the ball over, we are going to be in ballgames that people don’t expect us to be in,” Smith said.

Keith (0-5) will look to turn its season around Friday night at No. 6 A.L. Johnson  (4-1), who has won its last three games following a loss to West Blocton.  The Bears have allowed 38 points or more in every game this season and are averaging 10.2 points per game on offense.

SERIES HISTORY: A.L. Johnson defeated Keith 48-8 in 2005 in the last meeting between the two schools.

WHAT TO WATCH: If Keith’s diminishing playoff hopes are going to stick around for another couple of weeks, the Bears need to start finding some wins. A victory on the road at a ranked opponent would definitely open some eyes in Class 1A, Region 4.

Ellwood Christian (3-2) knows its in for a battle Thursday against a Linden team that shouldn’t be judged by its record. The Patriots (1-3) have losses to 2A’s No. 2 team Washington County, 1A’s No. 2 team Maplesville and 5A’s No. 1 team St. Paul’s — teams that have only one combined loss all season. Ellwood comes in off its only on-field loss of the season and will try to bounce back Friday against a hungry Patriots team out to prove its better than its position in the standings.

SERIES HISTORY: This will be the first meeting between Linden and Ellwood Christian.

WHAT TO WATCH: Ellwood Christian head coach Eric Martinear said this week’s game will be a good test of focus for his team after last week’s loss to Verbena. The Red Devils racked up 363 rushing yards and rolled to a 56-28 win.

Morgan Academy (0-5) will hit the road for the fifth time in six weeks Friday night when they travel to Autauga Academy to take on the Generals (3-2). After falling to Tuscaloosa Academy 42-14 last week, the Senators are still looking for their first win of the season.

SERIES HISTORY: Morgan Academy and Autauga Academy have not met since 1995.

WHAT TO WATCH:  The Senators have not scored more than 14 points in any of their five games this season.

Turnovers doomed Meadowview Christian  (2-3) in last week’s loss to Victory Christian, but the Trojans will look to bounce back this week. The Warriors (4-3) lost last week to Tabernacle 40-34 but had won their previous two games.

WHAT TO WATCH: Meadowview will look to get its season back on track after back to back losses to North River and Victory Christian.

Selma (4-2) bounced back in a big way last week with a 52-8 win over county rival Keith. It was a win the Saints needed after back-to-back losses to Hillcrest and McAdory, but now Selma will ramp back up its competition level. Selma sits fifth in the Class 6A, Region 4 standings and needs to make up ground in a hurry if it hopes to make the playoffs for the second straight year.  The Panthers (3-2) come in off a 34-27 win over Oak Grove.

WHAT TO WATCH: Marquell Moorer will start at quarterback in place of Jesse Boggs, who is out for the year with a knee injury.  The start will be Moorer’s third of the year. He also started Selma’s loss to Hillcrest and the Saints’ win over Keith last week.

Hornets finally break through, pull away from Oakwood