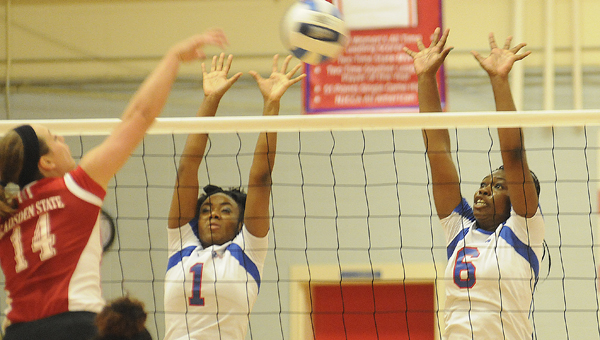 Wallace Community College Selma played its final home volleyball match of the season Tuesday, but it didn’t go as planned.

Gadsden State rolled into Selma and left with a quick 25-18, 25-23, 25-16 in a match that barely lasted over an hour. WCCS head coach April Harper said her team made too many mistakes Tuesday.

“The bottom line is the team with the fewest mistakes wins the match,” Harper said. “The momentum in the game is going to go from one team to the other. We need leaders, stabilizers, and closers. You’ve got to be able to go back there when the game is close and finish the game.”

Wallace had its chances but was unable to capitalize.

The Patriots led the opening set 12-8 before Gadsden stormed back for a 25-18 win. The second game was back and forth, as Wallace jumped out to a 16-12 lead but Gadsden reeled off four straight points to tie the set. The momentum of the entire match swung on a couple of plays at the end of the second set.

First, Wallace’s Courtnee Golphin hit into the net to give Gadsden a 19-18 lead. Next, a tap by Gadsden’s Audrianna Hargitt made it 20-18.

With Wallace trailing 23-22, Kenya Russell served into the net to put Gadsden one point away from a 2-0 lead.

Hannah Liverett closed the door for Gadsden with a hard spike that ricocheted off a Wallace player to finish the set.

The third and final set was the most decisive of the night, as Gadsden led early and did not trail after taking a 10-9 lead.

Harper said her team just let too many opportunities get away Tuesday.

“The coach is 1 percent of it and 99 percent of it is the athletes that the coach has given the knowledge, the skills and the training,” Harper said. “They’ve got to do it. The coach can never wear a uniform.”

Wallace plays its next seven games on the road.  The Patriots next game is at Southern Union Oct. 3. The Patriots are 4-3 and in fifth place in the Alabama Community College Conference.