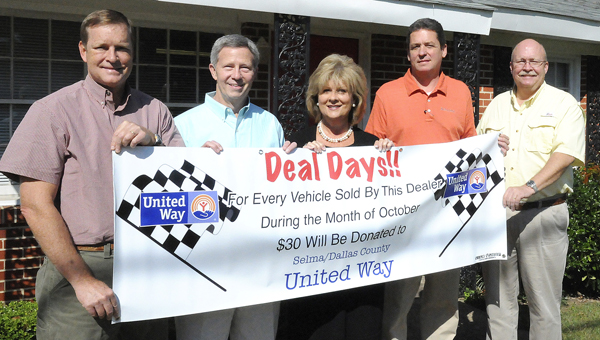 Anyone buying a car at four local dealerships this month will also be helping give back to the community.

Area car dealers have again partnered to help support the United Way of Selma and Dallas County. The campaign called “Deal Days” will run the entire month of October.

For each car sold, Turner Chevrolet, Moore-Stewart Ford, Moore-Stewart Honda and Reliable Cadillac GMC Truck will donate $30 to the United Way. The deal applies to both new and used vehicles, according to United Way executive director Jeff Cothran. “

It’s not only a great way to raise money, but it’s also a great way for these car dealers to promote buying cars in Selma,” Cothran said.

“That’s enormous,” Cothran said. “It’s a win-win. You give here, and it stays here. It’s a great way to buy local and help these organizations.”

A majority of the United Way of Selma and Dallas County’s funds are raised through payroll deductions at local businesses and industries.

Employers contribute by deducting a certain amount from employee’s paychecks each month and donating it directly to the United Way.

Once the United Way receives money, it donates 92 cents of each dollar directly to other charities. The remaining eight cents are used to pay for administrative costs, according to Cothran.

Morgan Academy parent Steve Scheer loads a box full of material given out during Saturday’s kickoff for the Selma Boosting... read more