Vigil goes on despite shooting 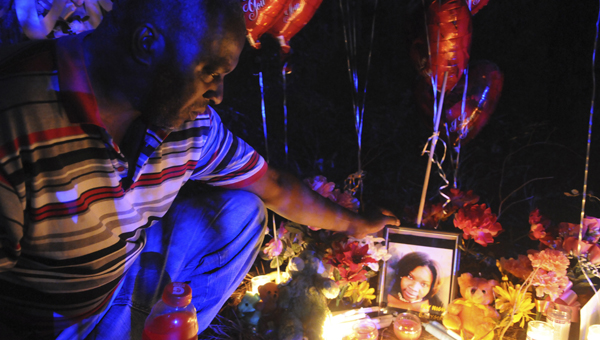 Willie Malon views a picture of his daughter Jamira Barley, 19, at a Friday candlelight vigil held in her memory a week following her death.

Guests crowded near Dallas County Road 29 on Friday to pay respects to Orrville teen Jamira Barley, who died in a nearby car crash earlier this month.

A candlelight vigil was held for Barley, who died after the car she was riding in struck a deer, left the road and hit several trees.

Tears were shed as attendees reflected on the Keith High graduate.

“I just been trying to live on,” Barley’s father Willie Malon said with a heavy sigh. “It’s just hard to explain.”

Malon said it’s tough to deal with the loss of his daughter, but having so much community support, something he didn’t expect, has helped him get through it.

“I didn’t have any idea so many people would come out here,” he said.

As difficult as the loss is for Malon, he’s forced to relive it every day as he passes the area the accident occurred on a regular basis.