Southside gets back on track with win over Wilcox Central 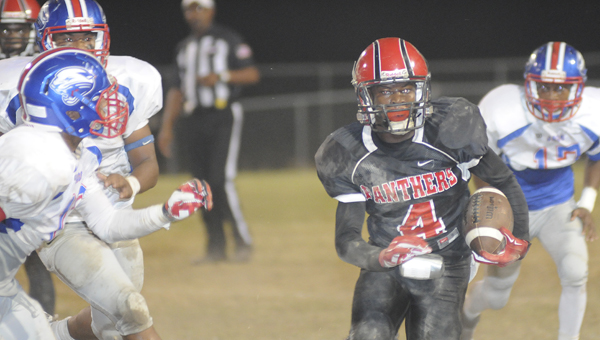 Southside scored on its first possession against Wilcox Central and then its defense took over and set the tone for a 26-14 win.

The Panthers (3-3, 1-2) managed four takeaways and shut the Jaguars out in the second half.

The game looked like a blowout at first. Southside scored on a 4-yard run by quarterback Scott Cole early in the contest.

The points were set up after the Panthers converted a fourth down from the 6-yard line.

After Wilcox Central punted the home team drove down the field again, finding pay dirt with a 25-yard pass from Cole to Ger’Quialius Fails.

A fumble recovery by Kevin Johnson and a 3-yard touchdown run by Jhalandius Sullivan put the Panthers up 20-0 at the end of the first quarter.

The Jaguars then made their comeback attempt. Capitalizing off two Southside turnovers, Wilcox Central managed two touchdowns before half time.

“I said guys they can’t beat us if we don’t beat ourselves,” Flowers said.

In the second half, Nicholas Bennett returned a interception for a touchdown. Kennedy Lewis added a fumble recovery and Delundre Edwards had a pick late in the game to keep Wilcox Central off the scoreboard.

Southside has a bye week coming and will travel to USM-Wright on Oct. 10.

Selma’s Taqwillis Chappell runs the ball against Keith in Friday night’s game at Memorial Stadium. The Saints rolled to a... read more