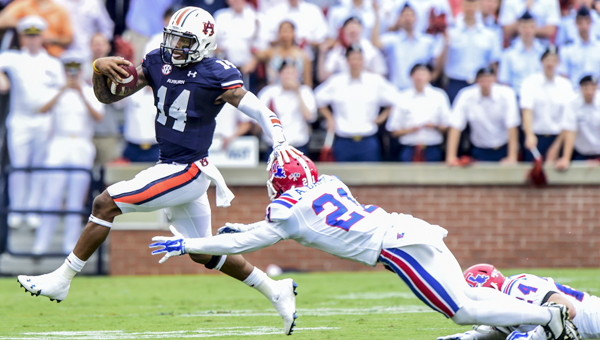 AUBURN (AP) — Nick Marshall threw three touchdown passes and rushed for 105 yards to lead No. 5 Auburn to a 45-17 victory over Louisiana Tech on Saturday.

Marshall completed 10 of 17 passes for 166 yards for the Tigers (4-0), who produced two scoring flurries while the offense otherwise sputtered at times. Next up: No. 17 LSU visits to start a stretch against six straight ranked Southeastern Conference teams.

Quan Bray, who scored three times, caught a 44-yard touchdown pass and returned a punt 76 yards for another score in a 53-second span of the fourth quarter. Those plays turned a competitive game into a rout against the Bulldogs (2-3), who have also lost to No. 4 Oklahoma.

Cameron Artis-Payne rushed for 116 yards and a touchdown on 22 carries for the Tigers.

Auburn starting linebackers Kris Frost and Cassanova McKinzy both left the game with unspecified injuries, potentially bad news for a defense that had just held Kansas State to 14 points. Coach Gus Malzahn said he didn’t know yet what their status would be against LSU.

The Bulldogs’ Cody Sokol completed 20 of 35 passes for 216 yards with an interception. Kenneth Dixon rushed for two touchdowns despite gaining just 29 yards on 14 carries, and Trent Taylor had eight catches for 80 yards.

Two scoring outbursts helped Auburn keep Louisiana Tech from pulling any closer than 24-10 after producing the only points of the third quarter.

Marshall also threw two touchdown passes in the final 1:36 of the first half.

Bray had a 37-yard touchdown catch with 34 seconds left before halftime after D’haquille Williams made a one-handed grab of a tipped pass for an 18-yard score. The ball appeared headed straight to one of the two defensive backs flanking him after linebacker Tony Johnson got a hand on the ball.

Auburn will host LSU next week as the Tigers get back into SEC play.