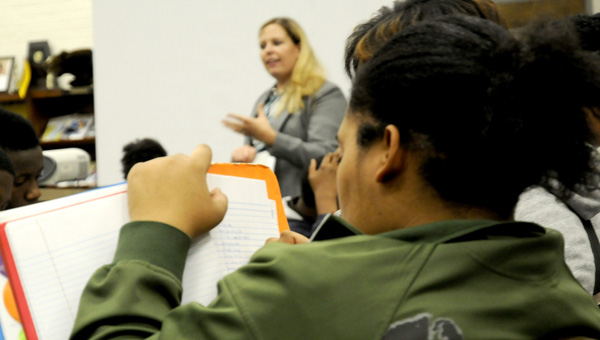 ORRVILLE — Keith Middle’s students geared up for their upcoming poetry competition with a two-hour workshop Wednesday.

Lindsay Doukopoulos, with Auburn University, visited the school Wednesday to lead the workshop, in which she shared some ideas and tips on writing and reciting.

“The first part of the workshop was for all of our English students, just to give them a taste of the excitement of writing poetry and how to unleash that inner poet,” Stanford Angion, who leads the poetry club at Keith Middle, said. “The second part is exclusively for students who are interested in becoming young poets.”

Doukopoulos, who leads serves as a coordinator for the region contest, said she was honored to help the students further improve on their craft.

“Dr. Angion was so fantastic to work with last year, and his students were so good that I just wanted to reach out, come here and help them prepare a little bit for this year’s competition,” Doukopoulos said.

While the workshop is a vital part of the preparing for the upcoming contests, it’s not the only time the students prepare, Angion said.

Since the school year began, the students have been exposed to school officials who have had them to read professional poems, write their own and complete other forms of practicing.

In the end, about 20 students usually end of volunteering to compete in the school competition, with hopes of making it to the next level.

The school is hoping to take three to six students to compete in the regional competition, which has had up to 40 students from schools across the nation in previous years, Angion said.

There are two categories in the regional competition. In one category, participants must recite their own poem and in the other they must recite a professional poem from memory.

While the school’s history of placing in the regional contest has given the group a desire and hope for more wins, their main focus is to work well together and enjoy the experience.

“It’s almost like a football or basketball team,” Angion said. “They bond. They support each other. Regardless of who comes out on top, they love each other.”

The Dart: McMillian has a job of compassion