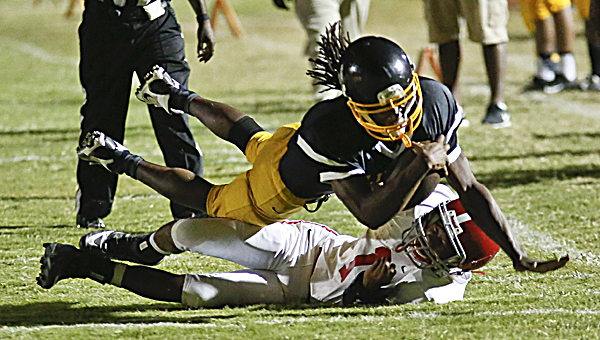 Ellwood Christian finally found a deficit it couldn’t dig its way out of.

The Eagles (3-2) fell to Verbena (3-2) 56-28 Thursday night at Memorial Stadium in a game the Red Devils led by double digits the entire way.

Verbena piled up 363 rushing yards, including 236 in the first half, and did not punt the entire game in an impressive effort that handed Ellwood it’s first on field loss of the season.

“We dug a hole too deep that we couldn’t climb out of,” Ellwood Christian head coach Eric Martinear said .

Ellwood had proven it could rally from big deficits this season, as the Eagles came from behind to defeat Francis Marion and Keith. Thursday was a different story and the defense was a big reason why, as Verbena seemed to do whatever it wanted offensively throughout the evening.

“Defensively we couldn’t get lined up and guys weren’t doing what they were supposed to do,” Martinear said. “If you can’t do what you are supposed to do then that’s what’s going to happen. You are going to get 56 put up on you.”

Verbena totaled 417 total yards and broke a two game losing streak after back to back losses to Loachapoka and Billingsley.

“This is the best offensive output we have had in four or five years — probably since 2007,” Verbena head coach Mike Harris said. “We are very, very proud of this.”

Verbena led 26-0 after touchdown runs by Eric Mims, Hakeem Underwood, Dorrian Parker and a touchdown pass by Tristan Short, but the Eagles threatened to climb their way back into the game. Ellwood quarterback Jalen Furlow led the Eagles on a 68-yard touchdown drive and then ran it in himself to make the score 26-6 with 1:46 left in the first half.

A Verbena fumble on the Red Devils’ next drive set the Eagles up with great field position, but time ran out before Ellwood could find the end zone.

A second Verbena fumble on the first play of the second half gave Ellwood the ball at the Verbena 39-yard line and Furlow once again ran it in from 2-yards out to pull within 26-14.

After fumbles on back-to-back snaps, the Red Devils steadied themselves on their next possession and Parker ran it in from 2-yards out to give Verbena a 32-14 lead. The Eagles drove the length of the field in a hurry to respond, as Furlow found Michael Lewis for a 31-yard score to pull Ellwood within 32-22.

That was as close as Ellwood would get the rest of the night.

Huff found Juwan Tyus for a 6-yard score with 3:26 left in the third quarter and after the Eagles were stopped for the first time all half, the Red Devils added to their lead again.

Ellwood’s Marqueith Gullett scored from 11-yards out to pull the Eagles within 48-28, but Parker capped off a big win with a 23-yard run with 3:15 left to play.

Thursday nights have not been real kind to the Eagles. Two weeks ago on a Thursday night, the Eagles had to forfeit their game to Sunshine after a computing error resulted in the Eagles’ roster being ineligible. Going into Thursday, that was the only loss Ellwood had on the season.

The Eagles couldn’t get off the field defensively and didn’t help themselves. Five times during the game Verbena was able to draw Ellwood offside either to get first downs or to get into a more manageable down and distance. The Ellwood offense totaled 301 yards. Verbena’s trio of running backs had the Eagles chasing them all night. Parker ran for 87 yards, Mims had 108 and Underwood had 152.

Ellwood’s next game is Thursday night at Linden, while Verbena will host Fruitdale Friday.

The 2014 Dallas County High School bass fishing tournament is back for a second year with a bigger prize. The... read more