A Selma man is behind bars after reportedly attempting to rape a 48-year-old female near the 1400 block of Lauderdale Street on Sunday, Sept. 14. 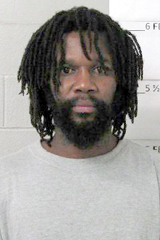 The suspect, Derrick Thomas, was arrested and charged with first-degree attempted rape last Thursday. He is currently in jail under a $60,000 issued Tuesday, according to Lt. Curtis Muhannad, with the Selma Police Department.

The victim told authorities the incident occurred when she was headed home early Sunday morning. Thomas reportedly approached her and threatened to assault her if she didn’t stop to speak to him.

When the victim stopped, Thomas allegedly grabbed the victim around her neck and mouth area and dragged her behind a nearby building as she screamed for help.

“According to the victim, Derrick Thomas told her, ‘You are going to give it up tonight,’” Muhannad said. “He struck her in the head and threw her to the ground as she fought him off. “

Officers arrived at the scene at 3 a.m. Sunday in response to an assault complaint, moments before the reported assault went any further.

“The rape was foiled by the arrival police officers,” Muhannad said. “When the officers arrived at the scene, the victim was reluctant to accuse Derrick Thomas of anything.”

The Selma Police Department’s Special Victims Unit reached out to the victim after further analyzing the narrative officers, who responded, gave of the incident.

First-degree attempted rape is a Class A felony.