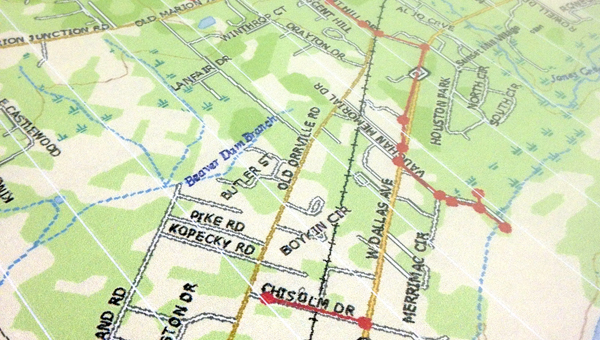 A map, compiled by city contract engineer Ray Hogg, provided members of the Selma City Council an idea of where much-needed sewage repairs are needed and the areas of work to be funded by a $4.275 million loan through ADEM. — Tim Reeves

The city of Selma is making a massive investment in a project that will be hidden from view.

In a move Tuesday, the Selma City Council approved a $4.275 million low-interest loan that will be spent on a large-scale sewage-refurbishing project that will address sewage drainage problems for a large section of Selma.

“This is a solution to a problem,” Evans said in a previous meeting. “My job is to bring before the council options and this is the one that best addresses our needs now.”

The terms of the loan, which are through the Alabama Department of Environmental Management and the Alabama Water Pollution Control Authority, provide the city the funds at an initial interest rate of 1.5 percent through Dec. 31, 2016 and then 2.25 percent interest through the end of the loan in 2036.

The scope of the work will have an impact on the sewage system throughout the system, but is focused on areas of the city where problems have been a constant problem.

The areas that have been targeted are where sewage lines date back before the 1960s and even 50s. As for other areas of the city not included in this project, their pipes were replaced in the 1970s and are in good condition.

“That is why you do not see a lot of work planned in that area is because you’ve got good sewer there,” Hogg told council members asking why work was scheduled in one ward and not in another. “These are the areas where had documented problems and we know that they are going to become big problems if not addressed.”

As for the scope of work, Hogg said he has built in contingencies for unexpected problems, but believes changing out all the pipes will not be necessary.

“We are not going to go in and wholesale change the pipes,” Hogg said. “If we can line the pipe, which is the better alternative, we will do that. In some cases, we may have to replace the whole section of pipe.”

As for problems or cost overruns, Hogg said the city is prepared.

“I feel like my estimated budget is more than enough to take care of this problem,” Hogg said. “But, there are some things I cannot predict.”

While the council approved the loan, the timeline for the project was not discussed.

The exact amount was not made available, but Selma Mayor George Evans and members of the Selma City Council are... read more