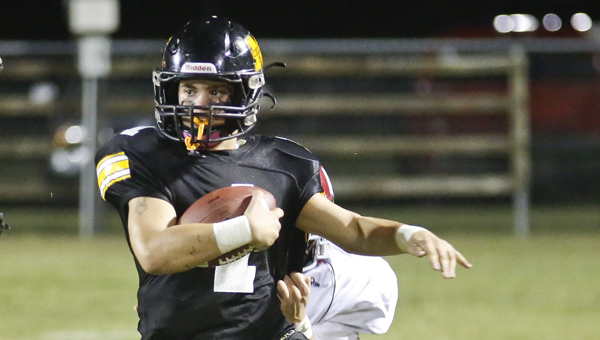 Meadowview Christian head coach Lebo Jones admitted after Friday’s game his Trojans were outplayed in every area and his staff, outcoached at every turn.

“This is my fault. We were outplayed and outcoached by a very, very good team,” Jones said after the 56-22 loss to Victory Academy. “This is best team we have played all season, and likely the best team we will play all year.”

Victory Academy, located in Columbus, Miss., rolled into Selma with the only undefeated record in the Alabama Christian Education Association at 4-0, and did little to diminish the reputation they had as a high-scoring, tough team.

Overall, the Eagles racked up 401 yards of rushing on the night, and collected more first downs, 26, than the Trojans had points.

On offense, Meadowview (2-2) was able to move the ball, but turnovers and mistakes often killed drives and killed scoring opportunities.

In the first half alone, Trojan receivers dropped passes that appeared to be destined for touchdowns.

“I am not saying those catches would have changed the outcome of tonight’s game, but it would have made it a little more interesting,” Jones said.

C.J. Grimes led the way for Meadowview, rushing for 130 yards and one touchdown. Chris Maul and Dakota Sanders also added touchdowns on the night. Overall, Meadowview generated 147 yards on the ground and another 110 through the air.  Next week, Meadowview will travel for the first of three straight road games, when they travel to Tuscaloosa to take on North River Christian.