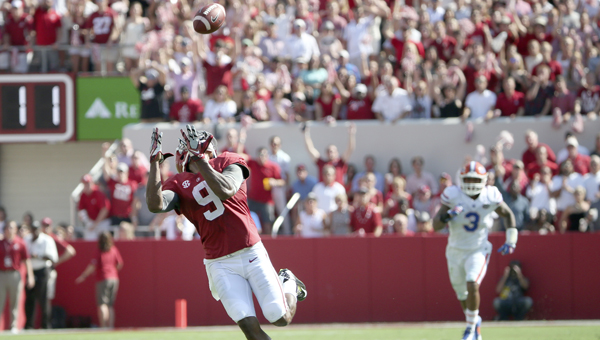 Alabama’s Amari Cooper hauls in a touchdown pass in the first quarter of the Tide’s SEC game against Florida Saturday in Tuscaloosa. Cooper finished the game with 10 receptions for 201 yards and three touchdowns. — Kent Gidley | University of Alabama

Sims threw for 445 yards, the second-best passing performance in school history, and Cooper scored three touchdowns as the third-ranked Crimson Tide overcame a sloppy performance to beat the Gators 42-21 on Saturday.

The Tide (4-0, 1-0 Southeastern Conference) committed 11 penalties for 80 yards and four turnovers that turned into 21 points for the Gators (2-1, 1-1), who still couldn’t handle Sims and the prolific passing connection.

Sims threw touchdown passes of 87 yards to Kenyan Drake on the opening play and 79 to Cooper later in the first quarter. Still, 400 yards for an Alabama offense known more in the past for bruising running games?

“I didn’t think it was possible,” Sims said. “I just try to take what I take and what the defense gives me, and just try to trust my guys that they’re going to be there.”

Cooper, who came in leading the nation in receptions, caught 10 passes for 201 yards and three touchdowns. He broke Dennis Homan’s 47-year-old record of 18 career touchdown catches.

The Tide’s turnovers and miscues kept the game close into the fourth quarter. Alabama’s 645 total yards was the most the Gators have allowed.

The previous high was Nebraska’s 629 yards in the 1996 Fiesta Bowl. Sims was 23-of-33 passing with four touchdowns, and was already up to 335 by halftime. That placed him a yard shy of the Tide’s Top 10 passing games.

“People have to respect his passing,” Tide coach Nick Saban said. “He has made too many plays for people not to respect him as a passer.”

Sims deflected much of the credit, saying that when you have Alabama’s offensive line, receivers and tailbacks, “You’re bound to have a good game.”

The Gators’ offense wasn’t much more successful than its defense.

Florida’s Jeff Driskel was harassed and ineffective passing. He was 9-of-28 passing for 93 yards and was intercepted twice while the offense produced just 200 yards.

Driskel did run for 59 yards, but it got so bad that Florida legend Emmitt Smith called for the quarterback’s benching on Twitter.

Demarcus Robinson, who had 15 catches in an overtime win over Kentucky, was held to two receptions for 14 yards.

Florida failed in its bid for a statement-making performance after a 4-8 season and to perhaps lift coach Will Muschamp, whose mentor Saban was on the opposite sideline, from the hot seat. The Tide’s blunders kept the game from being even more lopsided.

“We had our chances and we didn’t do it,” Muschamp said. “That’s the frustrating thing.”