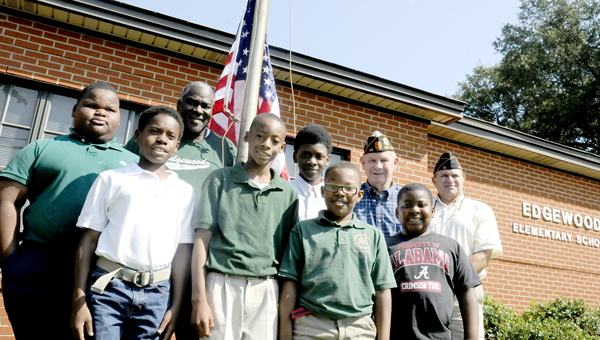 Thanks to the American Legion Post 20, Edgewood Elementary students and principal were able to raise a brand new American flag outside of the school Friday.

American Legion donated the flag after noticing the school’s previous flag had become tattered and faded.

School principal Joe Peterson said he was honored to receive the flag, but not surprised considering how often American Legion replaces flags across the community that are no longer presentable.

“It’s blessing and an honor for us to have the partnership with American Legion for them to think of our schools and make sure we have a flag,” Peterson said. “We want our students to know what it is to be a good citizen and be patriotic. It is very important to us as a school to have that flag to symbolize that.”

“Everybody in Selma that I’ve talked to is patriotic, and it makes them proud to see a new flag,” Lackeos said. “They take good care of the new flag, and give us the old flag to dispose of properly.”

After American Legion collect old flags, the hold a special ceremony at the American Legion Post, to properly dispose of them. During that ceremony, they deliver a speech about the flag, salute it and burn it.

For Edgewood Elementary student Michael Pettaway, it was special to be one of few students selected to raise the new flag.

Get out and support ‘See You at the Pole’

Pastor Larry P. Stover Praise Park Ministries Church of the Nazarene   One of the spiritual highlights of September is... read more