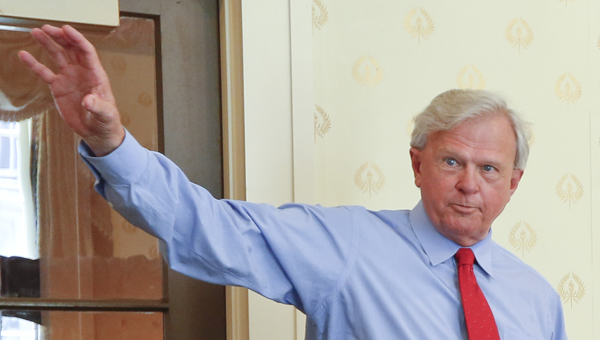 Don’t tell Dr. Parker Griffith the odds of him winning the race for governor of Alabama. He has people for that.

Don’t tell Dr. Parker Griffith that Alabama is a “red” state, moving more conservative with each passing election and is a state that now routinely votes in bulk for any candidate under the GOP banner. He’s seen the results and the statistics.

Griffith, the Democratic nominee for governor, is an underdog against incumbent Gov. Robert Bentley, both in polling and in fundraising. But, that hasn’t stopped him from waging a full, statewide campaign that included an unannounced stop in Selma Monday and a sit down with the Times-Journal.

And while the most notable part of Griffith’s campaign platform is the call for the state to expand Medicaid, joining the Federal government’s health insurance program — also known as ObamaCare — economic development is something Griffith has seen as a failing of the current administration.

“What has really hit me as I have traveled the state is seeing the devastation of rural Alabama; the high unemployment rates, the lack of industrial development,” Griffith said. “The concentration on Mobile and other places, and skipping the rest of the state, has really had an impact. Areas like Mobile and Madison County are bright spots, but those successes will not carry the rest of the 4.8 million people of Alabama.”

Griffith, who recognizes the successes in economic development in Selma and Dallas County in recent years, said an untapped potential for the area, primarily Selma’s riverfront, might be connected to the approval of gambling.

Griffith said the jobs tied to the concept of riverfront casinos and hotels are far more than just those dealing the cards.

“Gambling is one of the few things that I know of that would tremendously expand the working opportunities for the Black Belt,” Griffith said. “People think about casinos and they don’t think about jobs. But, those jobs that are created include … the highly-skilled folks who maintain machines, not just the gambling machines, but I’m talking about refrigeration units, I’m talking about air conditioning units; I’m talking about the whole thing, a major, major hotel hospitality concept.”

“Once you embrace that concept, then you have here, these 19th century buildings, sitting here waiting to be developed,” Griffith said.

Never one to admit the chances for victory are not in his favor, Griffith said his focus is on sharing with Alabamians his vision for the state and the future he sees.

“We’ve got so much opportunity here in Alabama, but we’ve got to look at it through the eyes of the future and not nostalgia politics, which is going on right now,” Griffith said.

The general election in Alabama is set for Tuesday, Nov. 4. The deadline to register to vote is Friday, Oct. 24.

Times-Journal editor Tim Reeves has been named president of Vicksburg Newsmedia, LLC and publisher of The Vicksburg Post. The Selma... read more