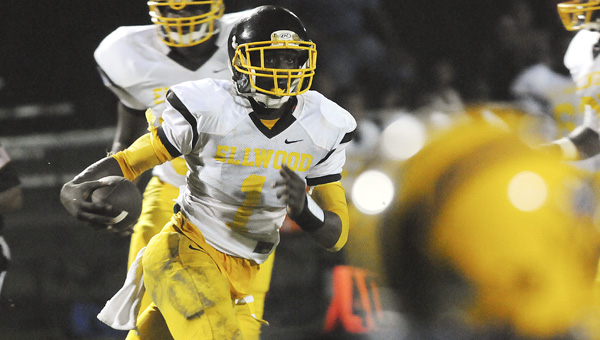 Ellwood Christian quarterback Jalen Furlow looks for running room in the Eagles’ game versus Keith Friday night. Furlow did most of his damage through the air Friday, throwing three second half touchdown passes to help Ellwood recover from a 16-6 halftime deficit in time for a 38-16 win.–Daniel Evans

ORRVILLE — Ellwood Christian (3-1) regrouped from an ugly first half in time to roll off 32 consecutive points in a 38-16 win Friday over rival Keith (0-4).

Eagles’ head coach Eric Martinear said that in the past, this was the kind of game Ellwood would have lost. The Eagles had 11 first half penalties, turned the ball over on their opening possession and gave winless Keith a lot of reasons to celebrate in the opening half.

Instead, Ellwood may be starting a new trend. For the second straight year, the Eagles rallied past Keith in the second half for a big region win.

“This is the new Ellwood baby,” Martinear said after the game. “We are going to fight for four quarters. That’s the way we train in the weight room and that’s the way we’re conditioned.”

In last year’s comeback win over Keith, Ellwood quarterback Jalen Furlow led the way with 112 yards rushing. Friday night it was Furlow’s arm, paired with some great catches from wide receiver J’miere Solomon that brought the Eagles back.

Keith didn’t have an answer, especially when running back and corner Jeremiah Campbell left the game with an ankle injury.

“We were running on fumes and we were just trying to hold on,” said Keith head coach Harry Crum. “… They found where our weaknesses were and they exploited them.”

Ellwood, a team that was forced to forfeit last week’s game against Sunshine due to a computing error, refused to give in.

After Kenneth Jones scored on a 3-yard run with 6:18 remaining in the third quarter to pull the Eagles within 16-12, Furlow threw the first of three second half touchdowns to a streaking Solomon, who somehow got behind three Bears’ defenders for the score.

Solomon was also the recipient of the next Ellwood touchdown, as Furlow once again found his favorite target. This time it wasn’t as easy, as Solomon caught the pass across the middle and then did the rest of the work, racing across the field for a 28-yard score to give the Eagles a 24-16 lead with 10:58 left to play.

The Ellwood defense, which held Keith to only 33 yards in the second half — with 27 of those coming on the last three plays of the game — forced a three-and-out and a punt on the Bears’ ensuing possession. The punt went almost nowhere, rolling a total of two yards to set the Eagles up at the Keith 14-yard line.

Jones found the end zone again soon after, giving the Eagles a 30-16 lead with 8:13 left to play. After another punt, Furlow put the game away with an 11-yard touchdown pass to Michael Lewis with 3:03 remaining.

To Martinear, the second half was the best the Eagles had looked this year. Ellwood’s “HOBO” offense — high octane, big play — scored at will against a Bears’ team that was completely wore out.

“The guys were running their routes correctly and doing what they have been coached on,” Martinear said. “That’s how it looks, like a prolific offense. That’s the HOBO offense.”

It was a big difference from the opening half, where Keith controlled the action.

The Bears took a quick 8-0 lead after a 71-yard pass from Brian Crum to Deanthony Griffin set Keith up in great field position. Crum finished the drive with a 1-yard touchdown run.

Ellwood answered with a touchdown throw from Furlow to Marqueith Gullett, but the Eagles were unable to get the two-point conversion and trailed 8-6.

The Bears added one more score before the half on a 2-yard score by Ja’quan Lipscomb. Keith added the two-point conversion and led 16-6 at the break.Crum said in the second half, injuries starting piling up.

“We were running on fumes because we were down to just few athletes,” Crum said. “We had people hurt and when Jeremiah went down I was hoping they wouldn’t know we were weak in the secondary and at the corner, but they figured it out.”