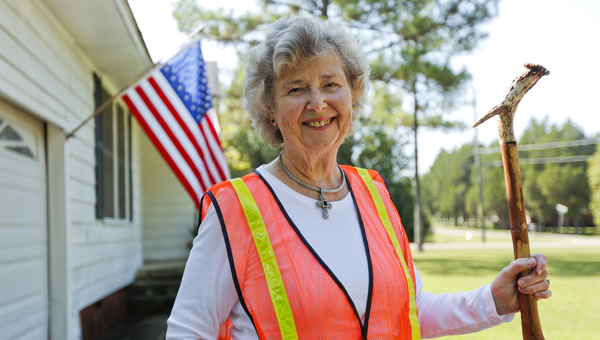 Eralou Divelbiss, a resident of Selma, has picked up over 10,998 gallons of trash since the spring of 2012, as part of a campaign to clean up the city. — Alaina Denean

Littering is a constant problem in Selma and Dallas County, but some are trying to make the area they call home a little more beautiful.

“Two years ago, in May, [Mayor George Evans] had a campaign to clean up our city, because people are real bad about dumping [trash] on Summerfield Road,” Eralou Divelbiss, a member of First Baptist Church and Elkdale Garden Club said. “I like being outside, so that appealed to me.”

Divelbiss took the campaign seriously, and started picking up the trash around her neighborhood.

“I started that spring, and by the time I had quit in August of last year, I had picked up over 10,998 gallons [of trash],” Divelbiss said. “That’s a lot of trash for one person to pick up.”

Divelbiss and her husband moved to Selma from Kansas 36 years ago. She said she likes Selma, but she wishes that people would take better care of their surroundings.

“I’ve enjoyed my time here, but I want people to be responsible for their property,” Divelbiss said. “I just can’t believe how dirty the south is, it’s beautiful, if they would just clean it up.”

Being retired from nursing, Divelbiss said she has more time for community projects, like cleaning up the area.

“Since we moved here from Kansas, the population in this area has gone down.”

As a member of First Baptist Church, Divelbiss had the opportunity to join a group of members that clean up trash around their neighborhoods. The church members participating in the group received vests to wear while they are outside picking up trash.

“The vest that I wear is for a group for my church called, ‘Christians Against Trash,’” Divelbiss said. She joked about people stopping and talking to her about her vest, with the acronym ‘CAT’ written across the back.

“I wave at people and I talk to people if they will talk to me,” Divelbiss said.

Her major goal is to get people to be aware of their surroundings, and take better care of the city they live in.

“I’ve enjoyed my time here, but I want people to be responsible for their property,” Divelbiss said.