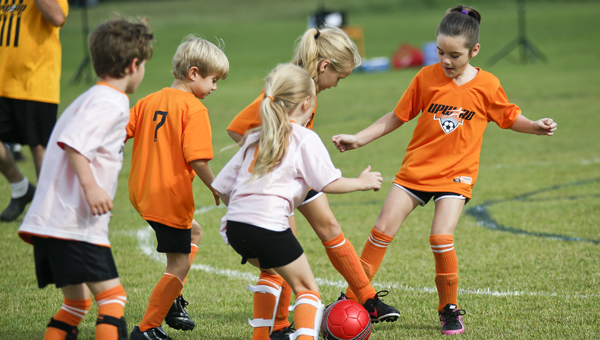 Bearcats and Boilermakers players go after the ball during their first game of the Upward Soccer season Saturday. (Alaina Denean | Times-Journal)

Upward soccer is back in season at Valley Grande Baptist Church, and the children are just as excited as ever.

The mission of upward is to make the children better at everything that they encounter in life.

“We are trying to make the kids a better athlete, mentally, athletically, socially, and spiritually,” Sims said.

Clarke Skelton, the pastor at Valley Grande Baptist Church was excited for the season to kick off, and he said that he was pleased with the turn out.

It was all screams and laughter as the kids played soccer for the first time this year. Some kids were excited about making a goal, while others were just happy to be out there playing.

Charlie Duran, a Bobcat player, said the hardest part about his soccer game was “when I was in the blue spot, I kicked the ball to the other team, and the ball didn’t go in the goal.” Duran said he did end up scoring a goal, and that made him feel “very good.”

For many kids, it was their first year playing, and their parents shared the excitement with them.

“The reason we chose Upward is because they do devotions with them at practice,” Amanda Holbrook, a soccer mom said. “It’s a wonderful atmosphere.”

Holbrook said she was very impressed with they way that coaches and faculty have handled everything, and if her son is interested in soccer again next year, that they will definitely come back.

Michael Duran has been coaching Upward soccer for five years and two sons of his own in the program.

“I grew up playing soccer, and it’s nice to give back to those roots and coach the little kids,” Duran said. “It’s more fun than anything else.”

Duran said the kids are a lot of fun to work with, and he enjoys getting out and spending time with them.

Duran’s favorite part about coaching them and watching them is the fact that they are “so eager to please, they crave attention; they’re always running for high fives, they like that excitement.”

Alabama’s Amari Cooper hauls in a touchdown pass in the first quarter of the Tide’s SEC game against Florida Saturday... read more