Magazine names Jubilee among the top 100 events in 2015 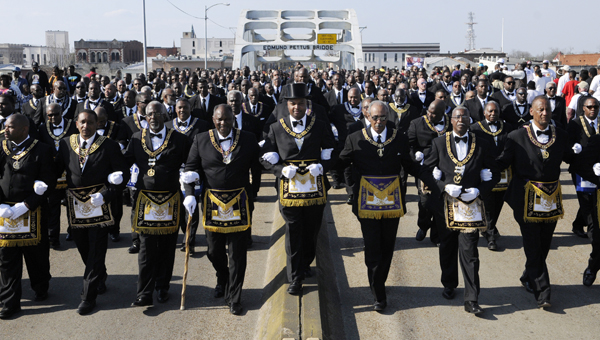 Thousands of visitors walk across the Edmund Pettus Bridge during the 49th anniversary of Bloody Sunday in March. The 50th anniversary, scheduled for next March, has been recognized as one of the top 100 events in North America to attend by the American Bus Association.– File Photo

The 50th anniversary of Bloody Sunday and the annual Bridge Crossing next March has been named one of the top 100 events to see in 2015, according to the American Bus Association.

The Jubilee, which will be held March 5-8, was one of four events from Alabama to make the list.

“I think it’s spectacular,” Selma-Dallas County Tourism director Ashley Mason said. “If you think about all the thousands of members of the ABA that will read their publication, it is incredible to get the word out about Selma. For it to be one of four events in the state of Alabama, that should speak volumes about how big a deal it is.”

The ABA annually ranks the top 100 events in North America as a group travel guide for the United States and Canada. The selection committee for the list was comprised of travel professionals and selected the winners from hundreds of nominated events.

Mason said the list can only be a positive for Selma, as it gives more attention to one of the city’s biggest events.

“If anything, it will at least tell people that Selma is here,” Mason said. “It will get the word out and even if they can’t come during Jubilee they will be able to come some other time.”

The ABA’s nomination process lasted until May 9. Tourism offices and ABA members were allowed to enter free nominations during that process, while non-members of the ABA could submit a nomination for a nominal fee of $100.

Judges used numerous factors as a guideline for what events should make the list. The event had to have widespread appeal to motor coach tour groups and have other notable attractions and adequate parking nearby. The event also had to be worthy of media coverage.

The National Voting Rights Museum, Browns Chapel AME and the Old Depot Museum are listed as nearby attractions of interest for those visiting Selma for the Jubilee.

The top 100 list is scheduled to be published as a supplement to the September/October edition of Destinations Magazine.