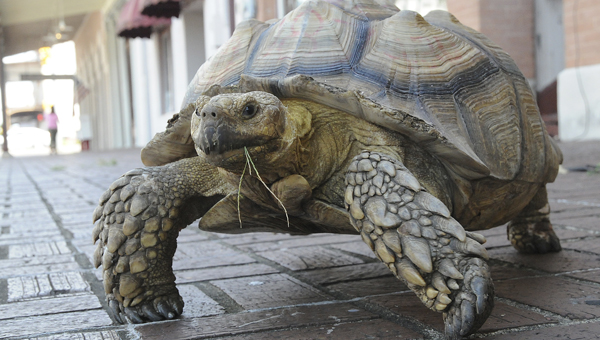 You wouldn’t think a 50-pound tortoise could make the nearly 17-mile trip from Marion Junction to downtown Selma in less than day.

Then again, you wouldn’t expect to see a 50-pound African sulcata tortoise in Selma in the first place.

Cody Vines was driving down Doe Run Road in Marion Junction Wednesday when he spotted a tortoise on the side of the road. It marked the second time in two days, Vines had seen this particular tortoise.

This time, instead of simply moving the exotic animal off to the side of the road, he placed it in his vehicle and continued on to Carter Drug Store, where he works.

“I had seen it on Tuesday around 3 p.m. and just got it off the road,” Vines said. “I saw it again today and just picked it up and started trying to find out who owned it. I didn’t want it to get hit by anything.”

Wednesday afternoon, Vines learned the owner was David Nichols, who is well-known for his expertise with snakes, lizards and all things reptiles.

“We rescue a lot of animals. We will get calls from the animal shelter and veterinarians when they have a need for a snake, or lizard or something to be rescued,” Nichols said. “We actually rescued this tortoise, and another, from a lady here in Selma, who couldn’t care for them any longer.”

Nichols was reunited with the tortoise, named Stop Light by Nichols’ children, Wednesday afternoon at The Harmony Club on Water Street. Vines had left Stop Light with Harmony Club owner David Hurlbut, before heading back to work.

“We’ve had the two of them for about two months,” Nichols said. “I cannot tell you how relieved we are to have him back safe and sound.”

UPDATE: Reports of missing boater proved to be a false alarm

Officials with the Selma Fire Department look down the Alabama River Wednesday afternoon from the Edmund Pettus Bridge. The department... read more