UPDATE: Reports of missing boater proved to be a false alarm 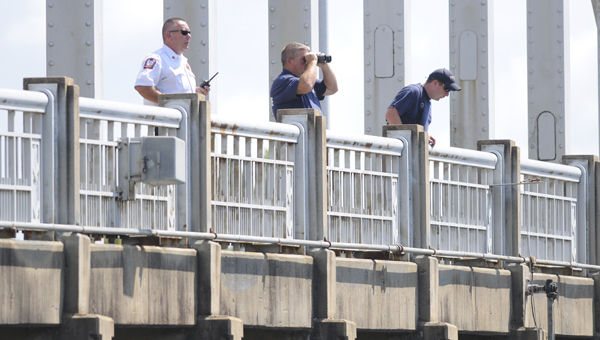 Officials with the Selma Fire Department look down the Alabama River Wednesday afternoon from the Edmund Pettus Bridge. The department received a call of a boater falling out of a boat on the river, but has not been able to confirm those reports. — Daniel Evans

A Wednesday afternoon call sent Selma Fire Department officials scrambling to search for any signs of a fallen boater in the Alabama River, but fortunately the unoccupied boat was simply abandoned.

Department officials were stationed on Broad Street, Water Avenue and the Edmund Pettus Bridge in response to a call around 1 p.m. from a fisherman who had noticed a vacant boat floating on the Alabama River. The call left officials worried that someone may have fallen from the boat, so Selma Fire Department Battalion Chief Doug Horton was relieved to learn less than two hours later that it was just a false alarm.

“We’re just relieved that no one was abandoned or hurt.” he said.

Horton said it’s vital the Selma Fire Department respond to all calls, especially ones as serious as the incident reported Wednesday.

“We take each call serious, and hope for the best,” Horton said. “It’s always serious until we find out that there is nothing wrong.”

A Selma man has been labeled as a wanted fugitive after allegedly shooting into a business near the 1100 block... read more