Ellwood, Keith prepare for annual rivalry in game of the week 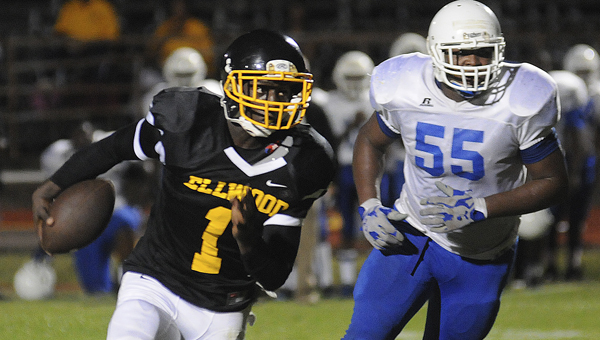 Ellwood Christian quarterback Jalen Furlow runs the ball against Akron in a game earlier this season. Furlow ran for 112 yards in last year’s game against Keith to lead the Eagles to a 26-20 victory. The all-time series between the two schools is tied at one win apiece.–File Photo

After tumultuous weeks that saw each team deal with its own unique set of circumstances, Keith (0-3) and Ellwood Christian (2-1) will just be glad to get back on the field Friday. The fact that each team is playing arguably its biggest rival in a region game just makes it sweeter.

The Bears were shutout by No. 2 ranked Maplesville in a game that was moved to Saturday because of lightning. Ellwood Christian was also technically shutout, but the Eagles never even took the field.

Ellwood had to forfeit its game with Sunshine Thursday night after a computer error forced the Eagles’ entire roster to be uncertified, or ineligible.

“It was tough and I literally cried tears because I was hurt for the kids not being able to play after the work they put in that week,” said Ellwood Christian head coach Eric Martinear. “I told them it’s like life. Life throws you curveballs and you have to adjust.”

Ellwood threw Keith a curveball last year when it went to Orrville and upset the Bears 26-20. Eagles’ quarterback Jalen Furlow ran for 112 yards in last year’s game, and will likely carry a big load of the offense again in Friday’s game.

“Last year he was breaking outside the pocket and made some good runs,” said Keith head coach Harry Crum. “We want to contain him all we can.”

After Ellwood’s win in 2013, the teams went different directions. The Eagles lost their last seven games, while Keith rebounded in time to make the playoffs for the sixth straight time.

This year couldn’t be more different early on.

The winless Bears need to get hot if they are going to keep that playoff streak alive this season. Crum knows his team has probably played the toughest part of its schedule already, as the losses were to 1A powerhouses Maplesville and Linden and 4A Southside. But he also knows the Bears need to turn things around in a hurry.

“Hopefully we can settle down and do some things and the end result will be a good one for us,” Crum said.

The Bears do not have tape on the Eagles from this year, but Crum said he will show his team film from last year.

Martinear said Keith has been running the same offense since he was in high school and not much has changed. But he also knows stopping Crum’s vaunted Wing-T rushing attack will not be easy.

“Nothing has changed,” Martinear said. “Coach Crum has been there since I was in high school and I pretty much think I know what they are going to run.”

SERIES HISTORY: Keith and Ellwood Christian have split their two meetings, so the winner Friday will lead the all-time series.

WHAT TO WATCH: With Maplesville and Linden expected to be the top teams in Class 1A, Region 4, Keith and Ellwood are hoping to squeeze into the other two playoff spots available.

Selma (3-1) will look to bounce back from a last second loss to Hillcrest-Tuscaloosa last week when they travel to McAdory (3-0) for its second game away from Memorial Stadium this year.

The game is likely to be a large factor in the playoff race in Class 6A, Region 4. McAdory’s defense has dominated in wins over Northridge and Holt the last two weeks and an opening victory over Bibb County, usually a playoff team in Class 5A, isn’t too shabby either.

WHAT TO WATCH: The Saints’ mental toughness will be tested this week when they take on the Yellow Jackets. Will Selma be able to move past Saturday’s close defeat to Hillcrest-Tuscaloosa in time to get back on the right track?

Southside (2-2) got back to .500 on the season last week with a 32-28 win over Monroe County in a game that had to be played Saturday.  The Panthers will likely have their hands full this week with No. 4 ranked Thomasville, who has started the year 4-0 and just two weeks ago defeated Monroe County 45-0.

SERIES HISTORY: Thomasville has won the last two meetings with Southside, which were in 2006 and 2007.

WHAT TO WATCH: Southside hopes the Panthers team that showed up in the third quarter last week versus Monroe shows up and not the team that finished last week’s game. Southside scored 24 points in the third, only to allow Monroe to score three times in the fourth to get right back in the game.

If Morgan Academy is going to turn its season around after an 0-3 start, the Senators have a chance to make some big waves when they travel to take on Edgewood Academy (4-0) Friday night.

Edgewood has not lost a game since 2010 and has shown no chinks in the armor this year. The Wildcats have outscored their opponents 173-13 this year.

SERIES HISTORY: The Wildcats defeated the Senators 41-6 the last time the two teams met back in 2011.

WHAT TO WATCH:  Edgewood Academy’s winning streak has reached 49 games, the third longest streak in the history of the state of Alabama. The Wildcats are six wins from tying the all-time record. A win for Morgan would be a big statement for the Senators in Jake Wingo’s first year on the sideline.

After not playing last week, Meadowview Christian (2-1) is preparing for one of its stiffest challenges on the season when it takes on Victory Christian in a game of conference leaders in the Alabama Christian Education Association. Victory (4-0), out of Columbus, Miss., has been dominant this year. Victory has scored 182 points, compared to only 92 allowed. Meadowview has scored 108 points in its last two games.

WHAT TO WATCH: Meadowview Christian has won two consecutive games after an opening loss. The Trojans will play a real measuring stick game Friday night when they take on Victory, who is the only undefeated 8-man team in the ACEA.

Dallas County (0-3) got off to a rough start last week versus Helena and trailed 28-0 in the second quarter when the game was declared a final. Sumter Central (1-1) rolled to a 35-7 win over Wilcox Central last week.

SERIES HISTORY: In the last meeting between the two schools, Sumter Central rolled past Dallas County 56-0 in 2011.

R.B. Hudson quarterback Romerit Nixon tries to keep his balance as he falls out of  in Tuesday night’s game against... read more