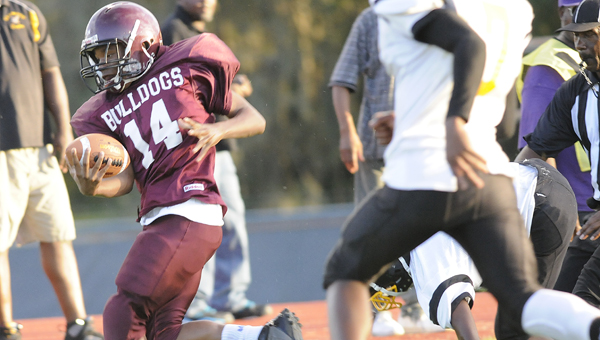 R.B. Hudson quarterback Romerit Nixon tries to keep his balance as he falls out of  in Tuesday night’s game against Ellwood Christian at Memorial Stadium. –Daniel Evans

R.B. Hudson quarterback Romerit Nixon tries to keep his balance as he falls out of bounds in Tuesday night’s game against Ellwood Christian at Memorial Stadium.

R.B. Hudson quarterback Romerit Nixon tries to keep his balance as he falls out of bounds in Tuesday night’s game against Ellwood Christian at Memorial Stadium.

Looking back, the Eagles probably wish they could have called it a night at that point, because the rest of the game was all R.B. Hudson. The Bulldogs scored 42 of the game’s next 48 points on their way to a 50-20 win over their county rivals.

“We were able to run and we got the play action and the misdirection,” R.B. Hudson head coach Eugene Foster said. “We were able to move the ball the way we wanted. In the first half, they got that kickoff return and it set us back but we stayed patient and got a couple of turnovers and that was the significant difference in the game.”

The ball seemed to bounce R.B. Hudson’s way most of the night. The Bulldogs’ third touchdown came on a kickoff that was originally fumbled, leaving both teams scrambling into a pile to undercover the ball.

But the ball wasn’t on the ground — it was in the hands of R.B. Hudson’s Darryl Oliver, who streaked down the sideline for an 80-yard touchdown. Later in the game, the Bulldogs set up a score on a fumble by Allen King that bounced right into the arms of Tyreshon Freeman for a big gain.

“I believe there’s a football God somewhere,” Foster said with a laugh after the game. “I always say the ball doesn’t lie and tonight the ball did not lie.”

Every time the Eagles seemed to get in move into good field position, a turnover or  penalty flipped the field and changed the momentum.

“We had several turnovers, three or four in the red zone and it’s hard to compete when you beat yourself,” said Ellwood Christian head coach Derrick Edwards.

Edwards said sometimes the game just doesn’t go a team’s way and the Eagles will need to forget about this one and bounce back next week versus Camden.

“We had situations where they fumbled the ball and we covered good and then one of their players would go for a first down or a touchdown,” Edwards said. “It was just one of those nights. We’ve got to learn from this and keep fighting.”

After Dixon ran the opening kickoff back, the Eagles appeared to be ready to play with the high flying Bulldogs. Edwards thought so too.

R.B. Hudson answered with 10.9 seconds remaining in the first quarter on a 15-yard touchdown run by Allen King to tie the game 8-8.

The Bulldogs took the lead just a few minutes later after an Ellwood fumble. R.B. Hudson quarterback Romerit Nixon ran 3-yards for a touchdown to make it 14-8 Bulldogs with 7:19 left in the first quarter.

Ellwood tied the game again on a misdirection pass play, where the Eagles quarterback ran left before firing the ball across field to a wide open Devium Cunningham for a 70-yard touchdown.

The tie didn’t last long, as Oliver came away from a dogpile with the ball and ran the ensuing kickoff for a touchdown to give the Bulldogs a 22-14 lead.

After recovering a fumble by Dixon on a reverse, the Eagles used a trick play to take a double digit lead into halftime. Tyreshon Freeman lined up just a yard or two from the sideline — nearly out of bounds — and the Ellwood defense did not notice. Freeman ran uncovered to the end zone and Nixon found him for a 25-yard reception to make it 30-14.

Ellwood found the end zone again on a 73-yard touchdown run by Cunningham to pull within 42-20 late in the third quarter. R.B. Hudson’s Amarian Molette finished the scoring with a 2-yard score with 5:08 left to play.