Retailers have big plans for this year’s shopping season 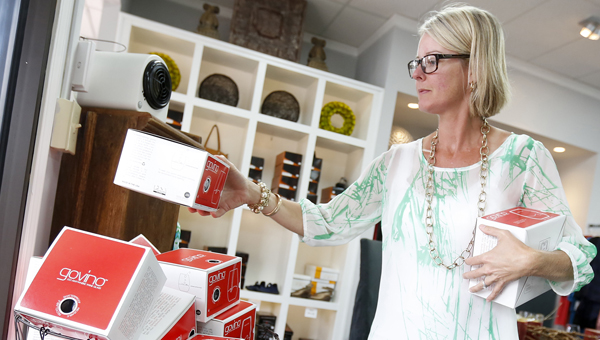 Becky Youngblood sets out merchandise in a display at the downtown retail and clothing store Allez-Oup. Local retailers are already making plans — and orders — ahead of the upcoming holiday shopping season. (Alaina Denean | Times-Journal)

It may be hard to believe, but it’s already time to get ready for the holiday season.

Gearing up for the season is just what some local businesses are doing. Preparing for the holidays takes time, and time is quickly running out.

“We’ve already ordered tons of merchandise, but we’ll start putting that out around Thanksgiving,” said Becky Youngblood, an employee at Allez-oup. “We’ve purchased a lot more merchandise in preparation for the holidays than we do for other times of the year.”

Many businesses start their marketing early to attract people before the holiday season begins, with most retailers beginning their promotions and advertising early in November.

“We do lots of different type of marketing,” Youngblood said. “We do Instagram and Facebook.” Allez-oup also uses newspaper ads, radio advertising, billboards and window displays to market their store.

“We market our events on the billboard, and we also have a marketing team,” said Sharon Krause, the assistant manager at the Selma Mall. “We start about the end of October getting our Christmas décor out and getting it ready to put up and then about the middle of November, we start putting it up.”

Many businesses have special events before the holidays to get people out and start shopping.

“We’re going to have a really pretty winter wonderland setup so that people can take their own pictures; because the economy is bad, so were trying to give people something to do that’s not going to cost them a lot of money,” Krause said.

The Selma Mall also has events to appeal to customers.

Both encourage people to get out and shop locally.

“I think it’s very important,” Krause said. “I think people need to shop within their city to keep the business here and keep the money in Selma.”

“It’s vital for every part of our community ….” Youngblood said.

The deadline to submit a theme idea for the city of Selma’s annual Christmas parade is Thursday, and organizers are... read more