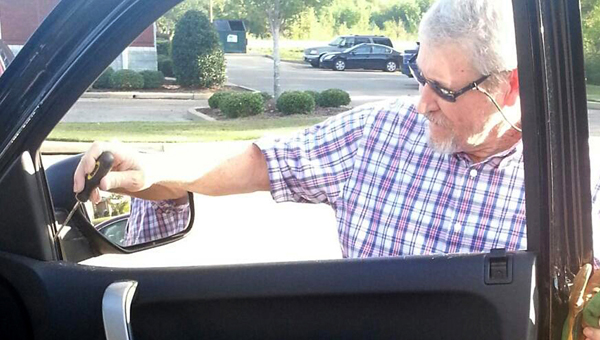 Florida resident Marshall Carroll begins the process of cleaning out glass from inside his truck Friday morning. Carroll and his wife stayed at the Holiday Inn Express Thursday evening and found their truck was one of seven cars vandalized in the parking lot overnight. (Alaina Denean | Times-Journal)

Marshall Carroll and his wife were supposed to be on the road, traveling to Tennessee Friday morning. Instead, Marshall spent his morning cleaning out broken glass from his truck, left there after vandals busted out one of his truck’s windows.

“It’s just frustrating,” said Carroll, who is from Tallahassee, Fla. “I am not really sure what to do right now. I was told my glass couldn’t be replaced until next week.”

Carroll’s truck was just one of seven vehicles that were vandalized sometime between late Thursday night and early Friday, while they were parked at the Holiday Inn Express.

“I came out around 5:50 a.m. and said ‘uh oh.’ And then I turned around and saw all the others,” Terri Rodriguez, from Fitzgerald, Ga., said. “I then went inside and told the young lady at the front desk, ‘you need to call the police.’ They didn’t know about it until I told them.”

Selma Chief of Police William T. Riley said when officers responded they found the seven damaged cars, all with one of more windows busted. Some had been simply vandalized, while others appeared to have been rummaged through.

“We do not have an surveillance video of that area, so we are not sure of exactly what time this took place,” Riley said. “Right now we do not have any suspects, but we are confident that we are looking for two or more individuals.”

Riley said those involved in the incident would at least face vandalism charges.

“We could also be looking at theft charges as well, depending if we discover anything was stolen,” Riley said.

Rodriguez, who is a field auditor for Speedee Cash, has been working in Selma over the years and this is the first problem she has had.

“I have never had a problem here at all,” Rodriguez said. “All this is is a few kids doing something that know they shouldn’t do.”

A resident from California, and trucks connected to a Mobile-based crew working on cell phone towers in Camden, were also impacted.

“That is another part about this that I hate,” Riley said. “For some of these people, this is the only impression of Selma they are going to have. They do not know that this is random and does not happen that often.”

Riley asked anyone with information on this particular case of vandalism contact immediately the Selma Police Department by calling 874-6611. He also asked residents to contact the department if they notice individuals hanging around parking lots late at night.

“We are going to increase patrols around the hotels,” Riley said. “But we need the public’s support in putting an end to things like this happening.”