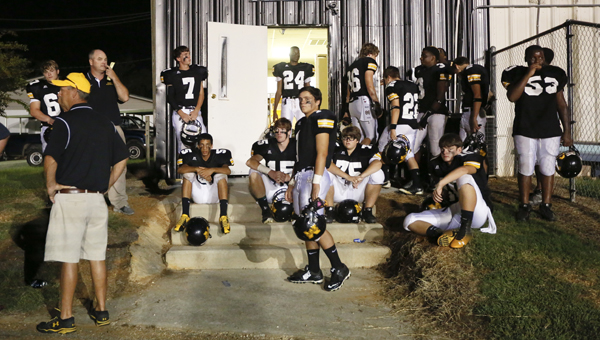 Meadowview Christian players wait outside their locker room during a lightning delay that eventually led to the postponement of their game against the Freedom Cowboys until Oct. 17. — Alaina Denean

Lightning delayed all six games in Selma and Dallas County Friday night, resulting in delays that lasted hours and in four cases, soaked fans having to return home without seeing much football.

Four games were either suspended where they were or postponed until Saturday. Below is an update on when each game will be played:

Hillcrest went right down the field on Selma, taking a 6-0 lead on a Chad Hyatt Jr. 1-yard touchdown run with 4:30 remaining in the first quarter. Then, as the Patriots lined up to kick the extra point, Mother Nature released a fury of rain and lightning onto Memorial Stadium, causing the game to be delayed.

Several times it looked like the weather would clear and the game would resume. At one point, near 10 p.m., both teams took the field. Hillcrest was lined up to snap the extra point when another strike of lightning lit up the Selma skyline, sending both teams scurrying for the locker rooms.

At that point, the athletic directors and coaches agreed to suspend the game where it was until 12 p,m. Saturday.

“This is the first time I’ve ever been through this in 21 years of coaching,” Selma head coach Leroy Miles said.

It was a first for many, including fans for both teams that ran for cover when heavy rain showers hit the area around 8 p.m.

“I really wanted to get it over with and get it out of the way,” said Selma head coach Leroy Miles. “It’s been a tough week with the situation we have going on with some players that are suspended for breaking team rules. We just want to put this game behind us.”

Instead, it’ll be another day for the Saints, who were without seven players in Friday’s game. Among those players was quarterback Jesse Boggs, which meant Marquell Moorer got the start under center. The first play of the game was a bad snap, which flew over Moorer’s head. The quarterback had to fall on it for an 11-yard loss and a rude awakening to 6A football in his first career start.

“We made some mistakes early in the game,” Miles said. “We jumped off sides and gave them a short distance to get a first down… and we had the bad snap over the quarterbacks head. That’s another mistake. Against a good football team you can’t make mistakes.”

Hillcrest had no problems moving the football in its short time on the field. The Patriots drove 63 yards in 14 plays, including converting a big fourth down to keep their opening drive alive.

When the game kicks off Saturday, the Saints will be looking to move to 4-0 for the first time since 1994 but will have to dig out of an early hole to do so. Hillcrest is still searching for its first win after tough losses to 7A schools the first two weeks of the season.

Keith-Maplesville rescheduled until Saturday at 1 p.m.

Keith and Maplesville players and coaches waited around for over three hours Friday night, hoping a stoppage in the rain would allow the Bears and Red Devils to take the field.

But, the weather never let up and the game had to be postponed until Saturday at 1 p.m.

“I would have liked to have gone and got it in, because we were already in the frame of the mind of being ready to play,” said Keith head football coach Harry Crum. “Now we’re going to have to go and kind of pump them up to get them back in the right frame of mind.”

The teams never even got a chance to warm up Friday, as lightning delayed the game before it was even set to get going.

The game is a big region game for the winless Bears, who will look for their first win of the year against the No. 2 ranked Red Devils. Maplesville has not allowed a point this season in two games.

With good field position and a loud home crowd behind them, it was hard to imagine a better start for the Trojans.

One play later, lightning forced a delay that eventually lasted for over three hours before the game was called for the night. Meadowview Christian and Freedom will instead play Oct. 17.

“[The players] were disappointed that we couldn’t play, but you can’t control the lightning,” said Meadowview Christian head coach Lebo Jones.

The date works out well for the Trojans, who originally had a game scheduled against Evangel on that date. That game had to be cancelled, giving Meadowview an open date that worked out for both teams. The Trojans were riding a two-game winning streak going into Friday’s game. Meadowview will host Victory Christian School next Friday night.

In the span of about 15 seconds, lighting struck twice at Southside High School; one of those strikes was actually lightning.

After a short weather delay Friday evening, the game between Southside and Monroe kicked off, with Southside kicking away.

Monroe County’s D’angelo Dale took the kick at his own 25-yard line and returned it 75 yards for a touchdown on the game’s first play. The ensuing extra point was blocked, leaving Monroe County with a 6-0 lead with 11:45 left in the first quarter.

Immediately after the extra point attempt, lightning struck near the high school, forcing referees to delay the game and send the teams back to the locker room.

The delay, after more than two hours, turned into a postponement, with the game rescheduled for 11:30 a.m. Saturday.

“We tried so hard to get this game in, but it was too dangerous for everyone involved,” Southside head coach Daniel Flowers said. “This is a game that we simply couldn’t not play. This is a region game that we have to play. So, we’re going to play Saturday.”

When the game starts Saturday, Southside will receive the kickoff with 11:45 left in the first quarter.