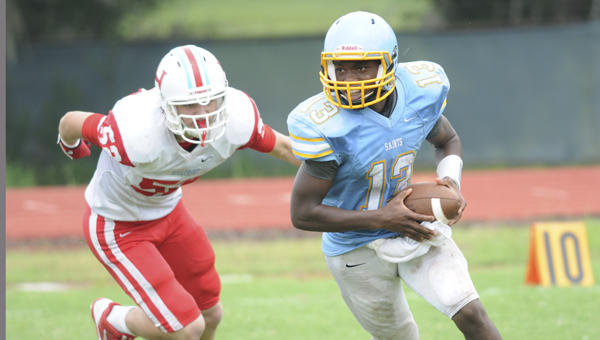 Selma High School quarterback Marquell Moorer tries to run away from a player from Hillcrest-Tuscaloosa in Saturday’s game at Memorial Stadium. Hillcrest won the game 29-26. The game started Friday night but was suspended due to lightning.–Daniel Evans

Selma rallied from a 13-point deficit to take a late lead against Hillcrest-Tuscaloosa Saturday at Memorial Stadium, only to watch the Patriots drive the length of the field to steal a 29-26 win.

When Marquell Moorer strolled into the end zone on a quarterback sweep to give Selma a 26-22 lead with 2:43 left to play, it looked like the Saints were on their way to their first 4-0 start in 20 years.

Instead, Hillcrest quarterback Chad Wyatt Jr. quickly marched the Patriots down the field and into the red zone. Selma held Hillcrest three times inside the 5 in goal-to-go downs, but on fourth down — with the game on the line — Cahill Ellis found the end zone on a 1-yard run to give the Patriots their first win of the year.

“I thought we had them stopped on that last play, but he was able to sneak in the end zone and take the lead back, “said Selma head coach Leroy Miles. “This was a dog fight. They came out on top and they have a good football team.”

Early on, Hillcrest picked up where it left off Friday night when the game was suspended until Saturday because of lightning. The Patriots led 6-0 at that point and added to their lead on a Wyatt Jr. 14-yard touchdown pass to Cole Frederick early in the second quarter.

The Selma offense, led by Moorer, found some life in the second quarter. Moorer, who was playing because quarterback Jesse Boggs and six other Saints were being disciplined for a violation of team rules, threw a 10-yard pass to James Johnson to pull the Saints within 13-7 at the break.

“We told Marquell before the game last night that the train is rolling,” Miles said. “We told him all he had to do was get into the train and drive it, and it runs on tracks so you can’t make any mistakes. Just drive the train. He did that. He drove the train tonight for us.”

The second half started with the only turnover of the game, and it ended up being a big one. Wyatt Jr. was intercepted by Michael Griffin, who ran it back 25-yards for a touchdown to tie the game 13-13 with 11:14 remaining in the third quarter.

Selma made the game’s next big mistake. Deep in their own territory, the Saints lined up to punt only to see the ball go flying over punter Herschell Brown Jr.’s head and into the end zone for a safety.

Hillcrest piled on a touchdown four plays after the safety, as Wyatt Jr. found Frederick on a corner route to give the Patriots a 22-13 lead with 2:32 remaining in the third quarter.

Selma fought back with a Moorer quarterback sneak to pull within 22-19 with 11:19 remaining in the game.

After the teams exchanged punts, Selma drove the field and faced a fourth-and-goal at the 8-yard line. Miles elected to gamble instead of attempting a field goal on a wet field with rain still falling.

The game paid off, as Moorer ran to the right untouched for what appeared to be a game-deciding touchdown.

“It worked out well,” Miles said. “Offensive coordinator Reggie Glover and coach  [Curtis] Wimberly were saying they saw something and we thought we had a chance to sneak in with a trips formation and it was successful.”

Hillcrest marched the ball 65-yards to steal the win in the final minute, earning the Patriots their first victory of the season.

“I wish I could tell you there was something magical I said to them and some kind of wand that I waived,” said Hillcrest head coach Sam Adams.

“But I think they all just stepped up and had confidence in each other. We had a few positive plays in a row there and we got some momentum going and knocked it in on the goal line.”

Selma will try to bounce back next week at McAdory, while Hillcrest will host Bessemer City.