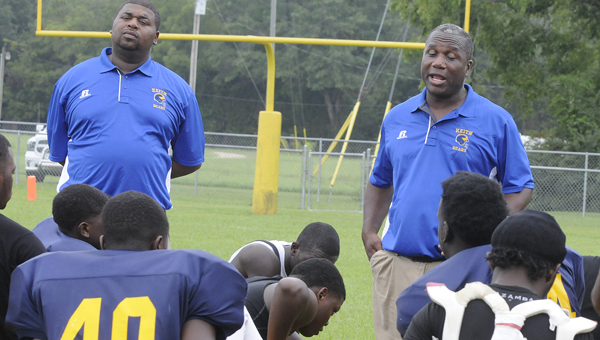 By Sarah Robinson
The Selma Times-Journal

The postponement of the Maplesville-Keith game Friday kept the Red Devils offense at bay for another few hours, but when kickoff finally took place Saturday under clear skies, Maplesville flexed its muscle and blew out region rival Keith 55-0.

The Red Devils also extended their streak of three consecutive shutouts to begin the year. Keith (0-3), who stayed winless on the year, has still never won a game against Maplesville.

“Psychologically, I think that’s a barrier in our kids’ mind,” said Keith head coach Harry Crum. “On top of it, Maplesville is very sound.”

The Red Devils (3-0) won all three phases of the game Saturday, taking control early with four touchdowns in the first quarter and piling up 48 points in a one-sided first half.

“It makes us 3-0, so we’re excited about that,” said Maplesville head coach Brent Hubbert. “Having to go through a little adversity, where we had to sit last night and come back, I thought the kid’s responded well. They came in and did a good job.”

Crum knew it would probably be a tall task for his Bears to defeat No. 2 Maplesville, who has yet to be challenged this year, but he said his team made a lot of mistakes.

“I thought that our tackling was not good,” Crum said. “There were a lot of spots where our blocking wasn’t good. That’s the fundamentals of football—blocking and tackling.”

The opening kickoff set the stage for the entire evening as Maplesville’s Terence Dunlap returned it the length of the field for a quick touchdown. Trevor Wallace added the next two touchdowns for the Red Devils, giving Maplesville a 21-0 lead. Dunlap added Maplesville’s fourth touchdown of the opening quarter on a 10-yard touchdown run and the rout was on.

Maplesville’s Kendarious Bradley, Troy Harrison and Dunlap added touchdowns in the second quarter as Maplesville extended its already large lead to 48-0. In the second half, the quarters were reduced to six minutes apiece and the clock ran continuously.

Keith will play at county rival Ellwood Christian next week.

Meadowview Christian players wait outside their locker room during a lightning delay that eventually led to the postponement of their... read more