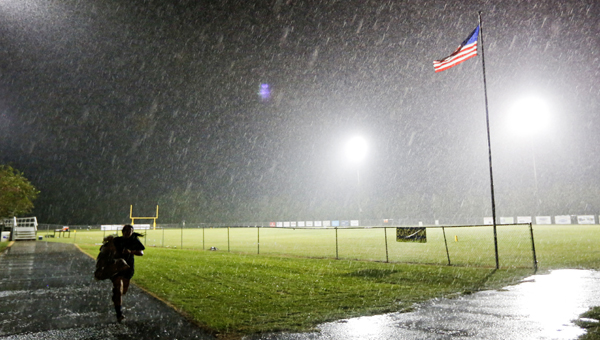 Maggie Tipton runs to the concession stand to take cover from the rain Friday night at Meadowview Christian School. The game between Meadowview and the Freedom Cowboys was called due to lightning and has been rescheduled for Oct. 17. — Alaina Denean

After the first hour of the delay, there were fans still holding out hope.

At the end of the second hour of the delay, fewer remained, but there was still hope of a game.

After nearly three hours after the start of the game at Southside High School, between the Panthers and Monroe County, all that remained were a few parents, school staff, referees and the Care Ambulance.

At 9:50 p.m., referees and representatives from both teams agreed that the rain wasn’t going to end anytime soon and the threat of lightning was still too high. With that, the game was postponed until mid-day Saturday.

“It’s frustrating. I can’t tell you how frustrating it is,” Southside head coach Daniel Flowers. “But, you can’t be angry at God. There’s a reason for all of this and we just have to know that. Our job now is to get these players pumped up and ready to play tomorrow.”

In one of the most unusual nights in area high school football, the scene that played out at Southside High School was the same as the one played at Memorial Stadium in Selma, where Selma High and Hillcrest-Tuscaloosa were forced to schedule a Saturday game, as were Keith and Maplesville, who waited for hours for the rain to subside in Orrville.

The game scheduled to be played at Meadowview Christian, between the Trojans and Freedom-Huntsville, was rescheduled to Friday, Oct. 17.

“We were real disappointed, but that’s part of it,” Meadowview Christian head coach Lebo Jones said.

The rarity of such an event, where games had to be rescheduled, was not lost on the coaches.

“I started playing football when I was six, I played all the way through college, I’ve been coaching for 10 years and this has never happened,” Freedom-Huntsville coach Kyle Collins said.

Both the AISA and the AHSAA, the two main high school athletic governing bodies, have strict guidelines when it deals with the threat of severe weather and lightning. They also have guidelines as to when games must be played, the length of delays and when games can be rescheduled.

All of those factors came into play Friday.

Even those games that kicked off, few made it as far as halftime.

In Plantersville, the game between Dallas County and Helena was called in the second quarter with Helena leading 28-0.

The lone game played in Dallas County to play the entire game was held at Morgan Academy, where weather forced a few delays, but did not force the game to be postponed.