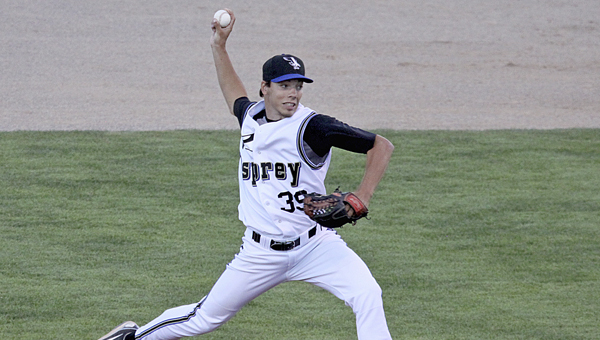 The last few months have probably felt like a whirlwind for Dallas County native Kevin Simmons, but this week he was just glad to be home.

Simmons. who was selected by the Arizona Diamondbacks in the 16th round of the 2014 MLB Draft, has been pitching for the Missoula Osprey  in Missoula, Mt., which is over 2,000 miles away.

“The big adjustment has been being away from home,” Simmons said. “I’ve done it before but it was never my job. It was just summer ball. With it being my job and being way away from home and not knowing anybody and trying to impress people, [it’s different].”

This week was his first time at home since June’s draft. Simmons said he tried to see as much family and as many friends as he could this week before leaving again at the end of the week to take part in the Arizona Instructional League. The AIL usually plays games in September and October and is generally populated by minor league players early in their careers.

If Simmons’ first year is any indication, he may have a long career ahead of him.

After working through some early butterflies in the minors, Simmons said he adjusted and started to pitch like he knew he could.

“I started off struggling a little bit and got into my groove, I’d say halfway through the season, and started feeling good again,” Simmons said.

The Dallas County High School alumnus finished with an ERA of 3.61 and posted 43 strikeouts in 47.1 innings of work.  Simmons said pitching in the minor leagues is not very different from facing collegiate batters.

“There’s not that much of a difference,” Simmons said. “There’s probably the same amount of talent, but the people in the minors are probably a bit more polished.”

He started the year as a starting pitcher, although he never actually started a game. Instead he piggybacked off the starter and came in the game in relief.

“They had me on the starter program and I would do the same things the starter would as far as working out,” Simmons said. “Then, I would just come in after the starter. I would throw the same amount of innings.”

After working as a starter for the first half of the year, Simmons was moved to the Osprey’s long reliever spot. It was the first time in his career that he wasn’t a starter or a closer, Simmons said, but he said he kept the mindset when he got on the mound.

“You are still trying to keep your team up or hold the game where it is,” Simmons said. “It’s pretty much the same.”

With his strong finish to the year, the pitcher said he believes his future is bright in baseball.

“Right now it looks good,” Simmons said. “I started off my first year and felt like I had good stats, but there’s always room to improve.”

Football Previews: Selma knows Hillcrest is better than its record