Football Previews: Selma knows Hillcrest is better than its record 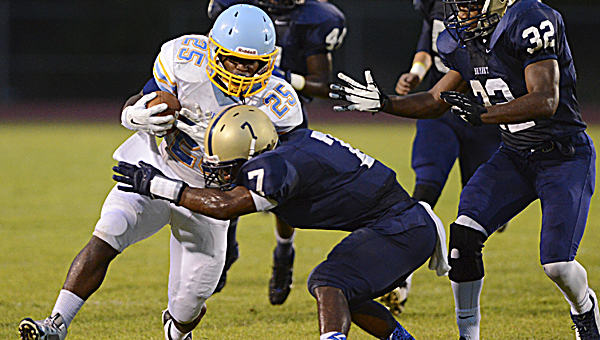 Selma High School head coach Leroy Miles believes his team will face its toughest challenge of the season Friday night at Memorial Stadium when the Saints take on Hillcrest-Tuscaloosa. Selma will look to start 4-0 for the first time since 1994.–File Photo

Miles knows that’s the case with Hillcrest-Tuscaloosa, Selma’s opponent Friday night at Memorial Stadium. The Patriots (0-2) are winless this season but have lost to 6A powerhouse Clay Chalkville and 7A Oak Mountain.

“That record doesn’t mean anything,” Miles said. “I have eyes and I can see. I’ve watched film on them and they have a real good football team. They have a lot of talent, they are strong, big and they play top talent all year.”

Miles knew after just a few seconds at looking at Hillcrest’s film that the Patriots were the most talented team his Saints have seen so far this season, and he’s spent all week trying to convince his players that as well.

“[Our players] know they are good,” Miles said. “They have not been mistaken that their record means we should beat them. They know the game has to be played on the field.”

When the Saints do hit the field Friday, they’ll be playing arguably the biggest regular season game during Miles’ time as head coach at the school. Selma heads in with an unblemished record and has largely been unchallenged this year after double-digit wins over Southside, Dallas County and Paul Bryant.

“It’s probably one of the bigger ones since I’ve been here,” Miles said. “I told my kids throughout the summer that if we could get past Hillcrest, it may be the turning point of this program.”

Dating back to last season, Selma has won its last seven regular season games. Miles can quickly name the last time Selma started 4-0 — in 1994 — because he was on the Selma staff that year. He knows for his team to win Friday, it’s going to mean they executed the gameplan.

“We have to control the football, keep the ball out of their hands and not make mistakes,” Miles said. “We aren’t going to be able to turn the ball over and make some of those mistakes we have made in the past with silly penalties.”

Ellwood Christian (2-0) will be chasing its first 3-0 start Thursday night when it takes on Sunshine (0-1) at Memorial Stadium. The Eagles have had no problems scoring the first two weeks of the season, putting 48 points up against Francis Marion and another 33 against Akron.  The Tigers have only played one game this season — a 55-0 defeat to No. 2 Maplesville.

WHAT TO WATCH: Ellwood Christian got its passsing game going last week against Akron, as quarterback Jalen Furlow tossed three touchdown passes to J’miere Solomon. The Eagles will likely test the Tigers over the top a couple of times Friday.

Although the results haven’t come through on the scoreboard just yet, Dallas County (0-2) has played competitively in its first two games at Selma and at Jemison. Last week against the Tigers, Dallas County found some offense, totaling 21 points — the most points the team has scored since Sept. 27 of last season. Friday the Hornets face Helena (2-0), a new school that has won its first two games by a combined score of 72-15.

WHAT TO WATCH: Dallas County head coach Marty Smith and Helena head coach Watt Parker will be facing each other for the ninth time Friday night, so there’s little in each team’s playbook the other coach won’t know something about. Smith said Friday’s game may swing on a trick play or two, since each offense may have to dig deep into its bag of plays.

After routing rival Keith, it looked like Southside (1-2) had turned its season around after a disappointing opening loss to Selma. Then Satsuma stormed into Southside and left with a 35-19 win, with the scoreboard not being a true indicator of how lopsided the game actually was. The Panthers will once again try to turn things around this week against Monroe County (1-2), who has lost its last two games by a combined score of 89-7.

WHAT TO WATCH: Southside turned the ball over six times last week in the loss to Satsuma. The Panthers will need to cut those down if they hope to get their record back to .500.

Since Morgan (0-2) opened up the 2013 season with a 49-0 win over Pike Liberal Arts (2-1), there’s been a lot of change for the Senators. Morgan has won only two games since then and has struggled in games on the road at No. 4 Monroe Academy and at Lee-Scott. The Senators hope the friendly confines of home will help jumpstart their season and their offense, which has scored only three touchdowns in two games this year.

WHAT TO WATCH: Senators head coach Jake Wingo said this year’s Pike Liberal Arts team is a lot different from the one the Senators have seen the last two years. Wingo said the Senators will need to limit mistakes to win Friday. Morgan has turned the ball over four times in its first two games this year.

Going into the season, it was clear that Maplesville (2-0) was probably going to once again be one of the top teams in 1A. The Red Devils have shown no chinks in their armor yet, beating Billingsley 54-0 and Sunshine 55-0 in their two games this year. Not a lot has gone right this year for Keith (0-2), who lost to Southside 40-12 and then fell to Linden 53-16.

WHAT TO WATCH: The Bears will need to jumpstart their offense to avoid starting 0-3 for the first time since 2005. Keith was outgained 558 yards to 68 yards last week.

Meadowview Christian (2-1) has a winning record for the first time since 2008 following back to back wins over New Life Christian and Evangel Family Chrsitian Academy. Friday night the Trojans will try to extend its winning streak to three games against Wiregrass Christian.

WHAT TO WATCH: Although the Meadowview Christian offense and specifically C.J. Grimes — who has scored nine touchdowns in the last two games — is garnering a lot of attention, the defense deserves its fair share as well. After the unit struggled in 2013, it has forced turnovers to take pressure off the Meadowview offense.

Tipton-Durant’s Markendrick Williams cuts back across field in his team’s 34-12 win over Martin Middle School in Tuesday’s game at... read more