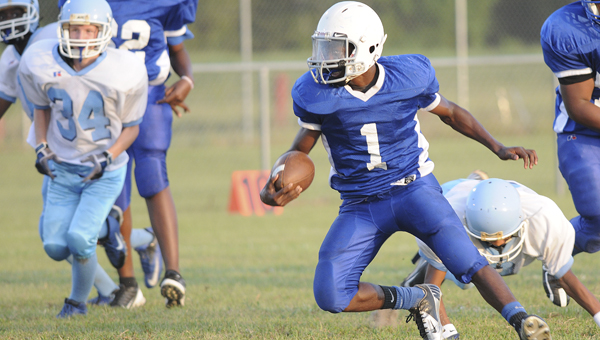 Tipton-Durant’s Markendrick Williams cuts back across field in his team’s 34-12 win over Martin Middle School in Tuesday’s game at Southside High School. Williams totaled 330 yards in the game and rushed for four touchdowns to lead the Blue Devils to the win.–Daniel Evans

Markendrick Williams ran for 330 yards and four touchdowns to lead Tipton-Durant to a 34-12 win over Martin Middle School Tuesday night in a game played at Southside High School.

Williams ran for touchdowns of 81, 55, 50 and 68 yards in an incredible performance that saw him average 22 yards per carry.

“We started him out at quarterback and then we started tossing it to him and using his speed to get outside,” Tipton head coach Mike Stokes said. “I knew he could run it if he ever got to the outside and once he did, he proved he could do it.”

Martin Middle School (0-2) head coach Jeremy White said he felt like his team played well, but it just did not have an answer for Williams.

Williams had scored his first touchdown of the game on an 81-yard run in the first quarter to give the Blue Devils (1-1) an early 8-0 lead, but Martin answered on a 3-yard touchdown run by Anthonie Rubin with 16.9 seconds left to play in the half.

A failed two-point conversion left Martin in the lead 8-6, and after the ensuing kickoff it appeared both teams would head to halftime in a two-point game.

Instead, after a long kickoff return by Korterious Thompson and a penalty, Tipton had an untimed down at the Tipton 45-yard line.

Williams scampered 55-yards for a score, extending Tipton’s lead to 14-8 at halftime. Stokes said it was the most important play of the game because it gave the Blue Devils momentum.

“That was huge and I think that is what really won the game for us,” Stokes said. “I told him if it wasn’t open just to pull it down and run with it. Just get what you can get and of course he pulled it down and scored.”

On the first play of the second half, Williams ran 50 yards for his third touchdown of the game and extended Tipton’s lead to 20-6. Martin refused to go away quietly though, scoring on its next possession on a 28-yard pass from Octavious Palmer to Derrelle Billingsley to pull within 20-12.

The Bulldogs would not get any closer.

Tipton shut the door on the next possession, as Williams, who was moved from quarterback to running back in the second half, cut across field for a 68-yard touchdown to put the game out of reach with 4:12 remaining in the fourth quarter.

“We made a few adjustments in the second half,” Stokes said. “We knew we had more speed than they did so we decided we were going to toss it and run with it. It worked out fine for us.”

Malik Johnson added the game’s final score with 1:17 left on a 13-yard run around the left end to give Tipton a 32-12.  Williams ran in the two-point conversion to make it 34-12 Blue Devils.

Both teams next games will be Tuesday, Sept. 16. Martin Middle School will travel to Jemison and Tipton will host Keith.

Mistakes were the difference Saturday as Concordia College Alabama fell to Arkansas Pine-Bluff 31-0 in its season opener. The Hornets... read more