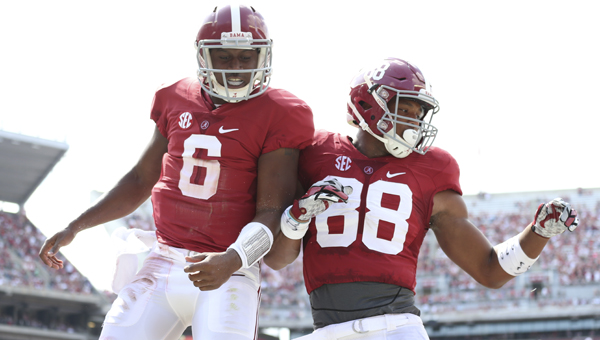 TUSCALOOSA (AP) — Alabama’s quarterbacks both got auditions for the starting job, but it’s not clear yet who will win the role.

Blake Sims had 214 passing yards and Jake Coker threw for 202 to lead the second-ranked Crimson Tide to a 41-0 win over Florida Atlantic on Saturday in a game cut short early for lightning. It’s the first time two Alabama quarterbacks had thrown for 200 yards in the same game and the second most passing yards in program history behind Scott Hunter’s 484 against Auburn in 1969.

Both quarterbacks got a chance to make a case for the Tide’s starting job in a one-sided game. The schools agreed to end the game with 7:53 left and Alabama (2-0) nearing the end zone again.

Sims’ only significant misstep was a fumble near the goal line.

“Blake played well except for the one play, and Jake got some experience,” Tide coach Nick Saban said. “I think that experience should help his confidence and his ability to play with a little bit better rhythm as he gets that confidence. He did some very good things as well.”

Saban had made it clear leading up to the game that the battle to replace AJ McCarron wasn’t over, though Coker only played briefly at the end of a victory over West Virginia. He enrolled at Alabama over the summer.

Sims passed for two touchdowns and ran for a third in his second straight start, all in the first three quarters. He was 11-of-13 passing and said the fumble resulted from “a misunderstanding.”

“Something we’ve got to get better on,” Sims said. “We did what we had to do and moved to the next play, and that’s a good thing you look out of it, look back at it (Sunday) and learn from it.”

Coker went 15-of-24 with a touchdown in his first significant action but the Florida State transfer missed some open receivers downfield.

Amari Cooker had 189 receiving yards and tied DJ Hall’s 8-year-old school record with 13 catches. It was his fourth straight 100-yard game, one shy of Hall’s school record, and his second in a row with double-digit receptions.

Florida Atlantic had allowed 784 yards in the opening 55-7 loss to No. 19 Nebraska. The Owls got $1 million paydays for each game, though.

“We had several freshmen on the field playing against some of the best players in the nation,” Owls coach Charlie Partridge said.

Sims got Alabama rolling early, leading the Tide to three touchdown drives in the first quarter. He ran for a 7-yard score then launched a 52-yarder to Cooper and a 39-yarder to Kenyan Drake. Sims completed eight of his first nine passes and the incompletion was on a dropped ball.

His other incompletion came when Cooper couldn’t bring in a deflected pass in the end zone.

Coker entered the game late in the quarter after Alabama recovered a fumble across midfield. The Tide got a field goal out of it.

Coker added a 3-yard touchdown pass to Jalston Fowler, set up by his 15-yard run on the previous play.

Both quarterbacks employed a similar strategy: Get the ball to Cooper as often as possible.

Coker threw two screen passes to him on his first drive and they failed to connect in the end zone on third down.Alabama also gained 204 yards on the ground. T.J. Yeldon (43 yards) and Kenyan Drake (45) both got seven carries. Jay Warren ran for 56 yards on nine carries to lead Florida Atlantic.

Saban said he and the players would rather have finished the game, but that it was a good decision to halt it. Thunder echoed through the sky, and many fans had already left. The ones that remained scurried for the exits when play was paused.