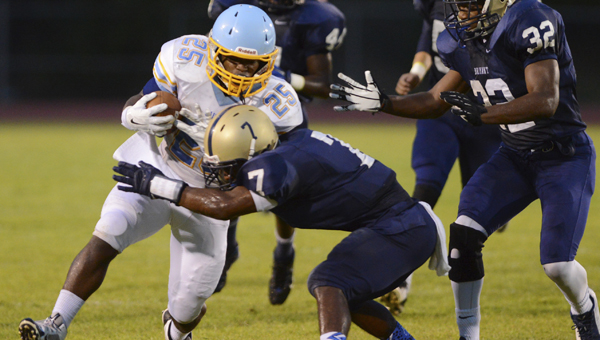 COTTONDALE  — The Paul W. Bryant High School Stampede fell short in their 34-21 loss against the Selma Saints on Friday night.

Stampede quarterback Reed Snyder led his team with 15 completions for a total of 177 yards, while running back Rodeyrick Washington rushed for 91 yards.

“To get better we need to improve the mentality and keep the kids believing,” said Paul Bryant coach Eldrick Hill. “Coming off of an 0-10 season, it’s very difficult to change the mentality. You can’t do it in one day, even though we’d like to. They say Rome wasn’t built in a day, so we will keep the kids positive and go back to work.”

The Saints went up early with two touchdowns in the first quarter, both from quarterback Jesse Boggs to receiver Marquell Moorer, for 60 and 30 yards, respectively. But it was the Saints’ running game that earned them the win.

“I think I played great,” Merchant said. “But there’s more work to put in. We wanted to stay toe to toe and dominate. Just wanted to dominate the game.”

“We lived up to our expectations,” said Saints coach Leroy Miles. “We wanted to control the football. We felt we could run the football and we did that, but we made a lot of mistakes though and they capitalized on a lot of our mistakes.

“We are going to look at the penalties and assess and evaluate what happened. I think if the Hill continues to work and they support him he will have a good program here [at Paul Bryant].”

The Stampede will visit Bessemer City next Friday.

Selma will go for 4-0 against Hillcrest-Tuscaloosa at Memorial Stadium next Friday night.