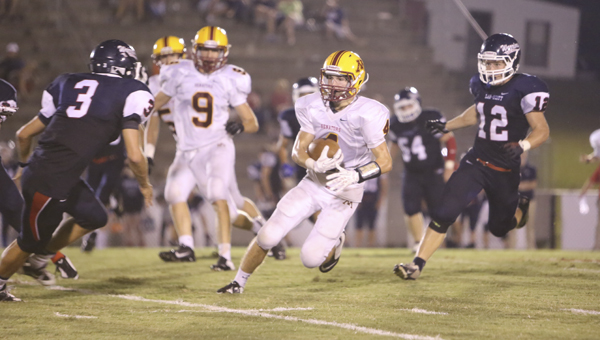 AUBURN — The lightning did not come without some thunder from the Lee-Scott Warriors on Friday night.

After a lightning delay late in the first quarter, the Warriors’ offense stayed focused.

“We got in and we tweaked something on offense and you saw that first play when we came back out was a touchdown,” Lee-Scott head coach Robert Maddox said. “It’s just something we had seen and said if they line up this way, this is what we are going to do. It worked.”

Before the delay, a Chase Aldridge interception lead to a rushing touchdown by Mitchell Lewis with less than 10 minutes left in the first quarter.

After the delay, Aldridge threw a touchdown pass to Austin Rabrin to make it 14-0 in the first quarter.

The Warriors weren’t done. Aldridge ran for 38 yards to score again in the first quarter to make the lead 21-0 going into the second quarter.

After the Senators finally got on the board in the first half, Lewis scored again on a 72-yard rushing touchdown for Lee-Scott early in the second quarter.

Aldridge and Lewis combined for more than 250 yards on the ground for the Warriors.

“I think Chase Aldridge handled the offense really well tonight,” Maddox said. “Mitchell Lewis ran really good, but that just means somebody was blocking up front. We got a lot of room for improvement and we got a big game next week against Bessemer.”

Keith loses big to No. 4 Linden on road

Keith’s Domonique Jones takes a handoff Thursday and tries to get space from Linden defenders. Jones ran for a 27-yard... read more