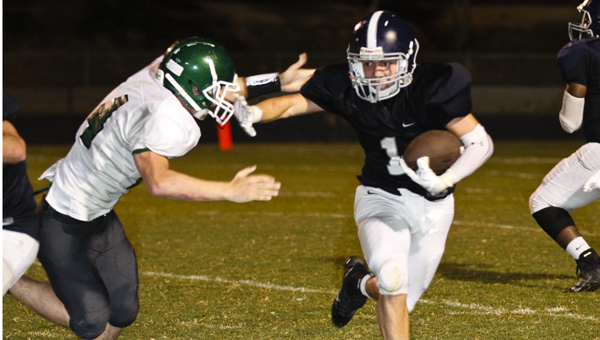 JEMISON — The ball just seemed to bounce the way of the Panthers on Friday night as Jemison took advantage of turnovers in a 30-21 win at home against area foe Dallas County.

The Panthers would have a little bit of luck bounce their way on the opening drive as the Hornets quarterback and center would have a mishandle of the opening snap. Chadwick Nunn would come away with the recovery for Jemison to set up the Panther offense first and goal from the Hornets 30 yard line.

On second and goal from the 7-yard line, quarterback Kevin Nunn would hand off to Shawn Poe who would score the games first points. William Lenoir would add the PAT to give the Panthers (2-1 Overall; 1-0 Area) a 7-0 lead.

Xavier Knight would take the hand off from center on the Hornets (0-2 Overall; 0-1 Area) next possession and scamper 41 yards down to the Panthers 4 yard line.

Three plays later DeLando Atchison would score from the 1 yard line. With Marcus Edward’s PAT up and good the game was knotted at seven apiece midway through the first quarter.

The Panthers would make it two for two on the night as Nunn would hit PJ Blue from twenty-six yards out for the Panthers second touchdown of the evening. With the PAT off the right upright, Jemison lead 13-7 late in the first quarter.

The Panthers would use a little more luck on the ensuing kickoff as the Hornets muff of the kick would fall into a Panthers hands and set Jemison’s offense up at midfield.

With a first and goal from the Hornets eight yard line, Robert Evans would take the handoff and plunge into the end zone. Nunn would add the two point conversion to put the Panthers up 21-7 early in the second quarter.

The Hornets would answer right back with a touchdown of their own as Knight would strike again, this time from 62-yards out. With Marcus Edwards adding the PAT, the Panthers lead was cut to seven, 21-14.

The second half would go quietly for both sides until midway through the third period when William Lenoir would add a 22-yard field goal for the Panthers to make the score 24-14.

After a four and out for the Hornets offense,  Jemison would tack on another touchdown via a Poe 24-yard touchdown run to bring the score to 30-14.

Knight would add his third touchdown of the game late in the forth quarter, this time on a 25-yard touchdown run. The PAT by Edwards would draw the Hornets to within nine with 5:31 to play.

With forty-eight seconds left on the game clock and facing a forth and thirty-four,  Knight would scramble through the Panthers’ defense but would come up short of the first down.

The play would turn the ball over on downs and give the Panthers their second win of the season, and their first in area play.

Knight lead the Hornets’ offense with 18 carries on 196 yards and three touchdowns.

Selma’s Kendarious Merchant is brought down by Bryant’s Tyler Slayton during the first quarter of a high scool football game... read more