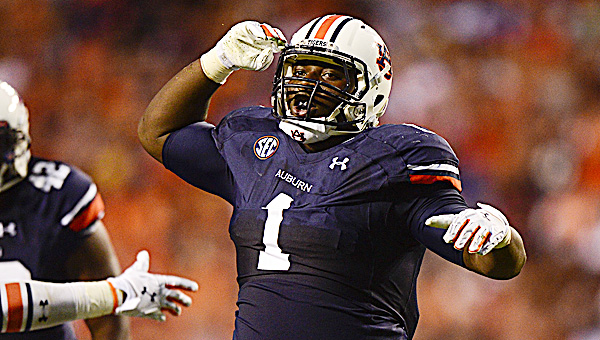 AUBURN (AP) — Cameron Artis-Payne ran for three touchdowns, all in the first half, and No. 5 Auburn used a dominant ground game to beat San Jose State 59-13 on Saturday night.

Auburn (2-0) had six touchdowns and 358 yards on the ground, including 112 from Artis-Payne. Quarterback Nick Marshall, making his first start of the season, ran for 103 yards, including a 27-yard touchdown on his final drive late in the third quarter.

Artis-Payne, a senior, had his first career game with more than one touchdown for the Tigers.

Blake Jurich threw a 75-yard touchdown pass to Tyler Ervin in the opening quarter but had two first-half interceptions for San Jose State (1-1).

Marshall completed 10 of 19 passes for 101 yards with one touchdown and no interceptions. Marshall and most starters were held out in the final quarter.

Marshall, suspended for the first half of last week’s win over Arkansas, lost a fumble to end his first opening drive of the season as a starter.

Marshall broke a tackle on a 49-yard gain before fumbling into the end zone. Jimmy Pruitt forced the fumble and safety Simon Connette recovered for a touchback.

Marshall made up for the turnover on Auburn’s second drive. His 27-yard pass to D’haquille Williams set up a 4-yard scoring pass to Ricardo Louis.

Artis-Payne dominated the remainder of the half, which included his scoring runs of 2, 5 and 1 yards.

Jeremy Johnson took over at quarterback for the Tigers in the fourth quarter and had a 1-yard scoring run. A fumbled snap on an attempted punt by San Jose State set up Auburn’s sixth rushing touchdown — a 3-yard run by Roc Thomas.

San Jose State closed its 2013 season by beating No. 16 Fresno State 62-52. The Spartans were 31-point underdogs against Auburn and couldn’t come close in their attempt for their first back-to-back wins over ranked teams.

Jurich completed 16 of 27 passes for 218 yards with one touchdown and two interceptions. Joe Gray took over at quarterback with about 10 minutes remaining and had a pass intercepted near the goal line late in the game.

The Spartans couldn’t score after Jurich’s 42-yard pass to Jourdan Soares set up a first down at the 6 in the third quarter.

Austin Lopez, who kicked a 27-yard field goal in the second quarter, was wide left from 29 yards to end the drive. Lopez made a 24-yarder later in the third quarter.

Tuberville is now Cincinnati’s coach. His son, Tucker, is a walk-on quarterback with the Tigers

Ellwood pulls away from Akron in second half