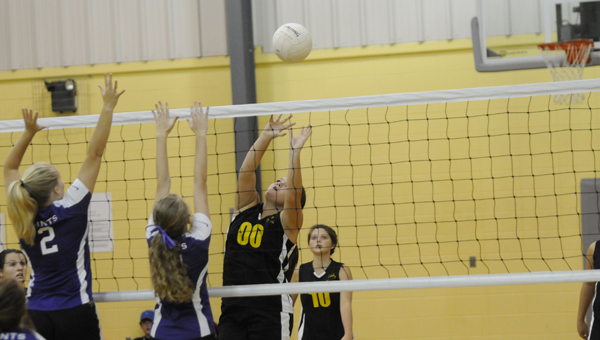 Meadowview Christian’s Claudia Kendrick rises above the net and hits a return shot above the outstretched arms of Ashley Dapprich, left, and another Evangel Family Christian Academy defender.–Daniel Evans

Meadowview struggled at times against Evangel Family Christian Academy Thursday, but the Trojans pulled together in time for a 25-10, 19-25, 25-20, 25-12 victory.

The Trojans (5-1) lost control of the match with a sloppily played second set, which allowed EFCA to tie the match at a game apiece. At that point the momentum was completely in the Saints’ favor and it showed through most of the third set. EFCA led 20-18 in the third, before Meadowview rattled off seven straight points to regain momentum in the match.

“We really messed up the second set so to come back out and win [the third], that let’s them know the first set wasn’t a fluke and they can beat them,” said Meadowview head coach Tim Burton.

EFCA head coach Darrell Dapprich agreed that the end of the third set probably decided the match, as it gave the Trojans all of the momentum.

“We had a couple of missed opportunities,” Dapprich said. “What we were doing well we got away from a little bit. We had a couple of missed sets. We were feeding the middle and she was having success and that was the turnaround and then the contested ball. Both teams were going for it and we didn’t get it and they did. I think it completely changed the complexion of the match.”

Meadowview pulled away in the fourth set after building an early 10-3 lead. The Trojans took advantage of Saints’ turnovers and pulled away to close out the match.

The final set was a welcome sight for Burton, especially on a night where Meadowview struggled with ball control and had numerous unforced errors — both issues that are uncharacteristic for the Trojans.

“They played good, but it’s the unforced errors,” said Burton. “That’s basically ball control. If it comes to you and it goes backwards from where you are at, we may make a play off of it but it’s not the play we were supposed to make.”

Burton, who isn’t one to get up and scream during a game, said he let his team work through its problems instead of calling timeouts.

“I don’t like to coach in a game,” Burton said. “I coach in practice. I want to sit and watch a game.”

Burton was impressed with his team’s performance when it eliminated mistakes.

“These girls are pretty good, so when they play like they are supposed to, it’s always fun to watch,” Burton said.

Meadowview Christian’s junior varsity fell in a three-set match to the Saints.

The matches were played at the YMCA of Selma-Dallas County, because Meadowview Christian’s gym is hosting the Little Lambs Consignment Sale.

The Trojans next match is Sept. 9 at Cahaba Christian.

Ellwood Eagles are well-rested for showdown with Akron

Ellwood Christian Academy running back Rayford Mitchell runs in last season’s game against Akron. If the Eagles’ are going to... read more