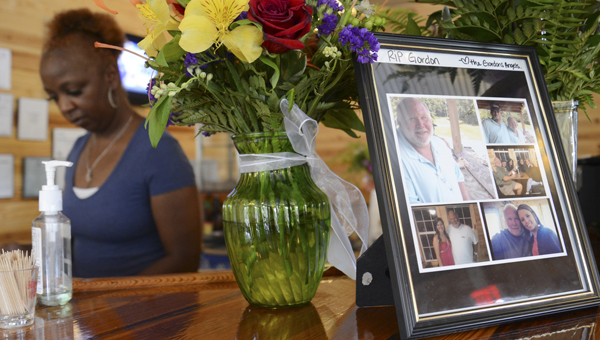 Brenda Haywood works behind the counter at the Sand Bar restaurant Wednesday afternoon near flowers and photos of Gordon McLendon. (Jay Sowers | Times-Journal)

Brenda Haywood had no idea it would be the last time she would see Gordon McLendon last Wednesday.

“He had done the employee schedule before he left, and told me to make any changes I needed to,” Haywood said from inside the Sand Bar Restaurant Wednesday, nearly one week to the minute McLendon died. “He was going golfing then, so he had a smile on his face when he walked out the door.”

Like so many, Haywood was stunned when she learned a few hours later that McLendon had died of natural causes while golfing with friends.

McLendon, who was a co-owner of the Sand Bar restaurant where Haywood works, was survived by his sister and step-mother, along with numerous aunts, uncles and cousins.

Since his passing, McLendon has been remembered with colorful flowers, black ribbons and framed photographs at the restaurant he helped build and open in January 2013.

Haywood said the thing she will miss most about her friend and boss was the time he would spend with her and other employees after the lunch rush.

“Between 2 and 5 p.m., Gordon would just walk with us,” Haywood said. “That was our time. He would try out new recipes and I was the guinea pig, or we would all just sit around and talk crazy talk.”

Over the year and a half they worked together, Haywood said she saw McLendon go out of his way to help others on numerous occasions.

David Pearce, who co-owned the Sand Bar with McLendon, said his life was also turned upside down by the news of Gordon’s passing.

Noting that they would sometimes disagree, Haywood said their bad days never overshadowed the good that defined McLendon.

“He wasn’t always this easy person to get along with or work for, but I can’t talk to him anymore,” Haywood said. “We aren’t going to talk or try out new recipes. It’s just different.”

Haywood said the unexpected and emotional loss has reminded her not to take anything — or anyone — for granted.

“The people you think haven’t affected your life are really the ones who have affected your life the most, and you just don’t notice until they aren’t there anymore,” Haywood said. “When we would get here in the morning, it used to be that you could look over and see the top of his truck as you got close to the restaurant. I am still waiting to see it, but it just hasn’t been there.”