Southside to use Gibbs and Cole at QB versus Satsuma 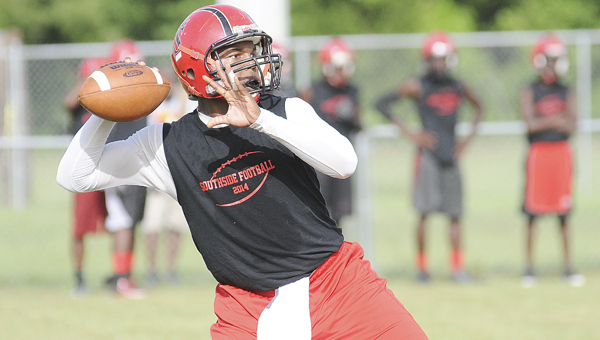 Southside quarterback Khamari Gibbs has missed the first two games of the season with a hamstring injury. Gibbs will not start this week when the Panthers play their home opener against Satsuma but Panthers’ head coach Daniel Flowers said he will play. –Daniel Evans

Southside quarterback Khamari Gibbs has been cleared to play Friday against Satsuma, but the junior will not start.

Instead, senior Scott Cole — who impressed in Friday’s win versus Keith — will make his third consecutive start for the Panthers.

Cole completed 6 of 12 passes for 153 yards and three touchdowns Friday in Southside’s win over the Bears. He also led the Panthers’ offense to 40 points, a mark Southside had not reached since 2010.

“In that Keith game, I thought he would play good, but I never thought he was going to be that good,” Flowers said. “He’s spinning the ball well. If it wasn’t for three straight up drops he probably would have had over 200 yards passing.”

Cole admitted he played well, but said he can still improve in many areas.

“I’d grade myself as an A-minus,” Cole said. “I could have done better, because I made little mistakes here and there. It’s been a learning experience.”

Gibbs’ health also factored into Flowers’ decision. Flowers said Gibbs’ hamstring injury was worse than he originally understood, so he would like to nurse the quarterback back into action a little at a time.

The Thomasville game is Sept. 19. Until then, Cole, who said he has learned a lot about the quarterback position from Gibbs, is likely to get the start at quarterback.

“This summer we have been working together and going to camps,” Cole said. “When I came in, if I start getting into trouble I go to him and he gives me a little advice on how the defense is looking and things I’m doing wrong.”

Gibbs said although the injury has been painful, being relegated to a spectator the last two weeks has been nearly as bad.

“It’s almost as painful as the injury I had,” Gibbs said. “I’m not used to just sitting back.”

Flowers said in a perfect world Gibbs would take over the reigns of the quarterback job fully when he gets completely healthy, but he said there’s a real chance that both players could play quarterback in every game the rest of the season.

Since both players are very athletic, Flowers said each of them will likely have roles on offense when they aren’t playing quarterback.

Gibbs and Cole are open to splitting the snaps, if it helps the Panthers’ win games.

“It gives the defense headaches because we bring two different types of games,” Gibbs said. “They try to stop one guy from doing one thing and as soon as you have him stopped you bring in the other guy.”