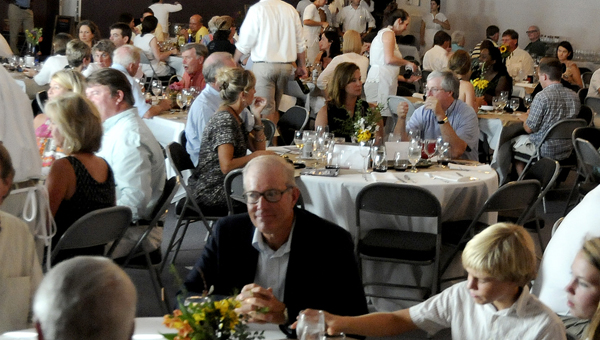 Hundreds of guests fill the George P. Evans Reception Center Sunday for BlackBelt Benefit Group’s ‘A Seat at the Table — Farm to Feast’ dinner. The dinner was one of four Labor Day weekend events meant to raise awareness about local grown food and money for the group’s community garden. — Sarah Robinson

After six months of preparation, the Blackbelt Benefit Group hosted a sold out ‘A Seat at the Table — Farm to Feast’ this past weekend.

The dinner was one of the four events Blackbelt Benefit Group held during the Labor Day weekend to educate the public about locally grown food, while raising funds for its ongoing construction and planning for the Mills Village Community Garden.

The Sunday event attracted hundreds of guests to the George P. Evans Reception Center, where attendees were provide with dinner prepared by Birmingham’s’ Shindigs Catering and heard Joel Salatin deliver a speech.

“It’s a relief on the technical side, but it’s also a boost of encouragement for what we’re doing,” said Josh Wilkerson, president of Blackbelt Benefit Group. “It lets us know that people care. It keeps us going.”

Wilkerson said the Sunday dinner raised enough money to fund architectural and engineering services and continue groundwork for the local garden, which he described as unique place where the entire community can be involved and learn about where food comes from in a fun way.

“A lot of people are afraid of today, because nobody knows about food today,” Salatin said. “At these kind of events, it’s really exciting to see communities come together the knowledge and the awareness. Dependency is the beginning of a healthy understanding of earth care.”

Chef Mac Russell said Shindigs Catering, which serves locally grown fast food, was excited to provide the meal for to ‘A Seat at the Table — Farm to Feast.’

Russell said it was pleasure providing dishes that were healthier than most, since the caterer grows the food itself.

“Blackbelt Benefit Group members are so sweet and so hard working,” Russell said. “It was fun to be able to help them out some, because they help the world so much.”

For more information on the Blackbelt Benefit Group, visit them online at blackbeltbenefitgroup.org.