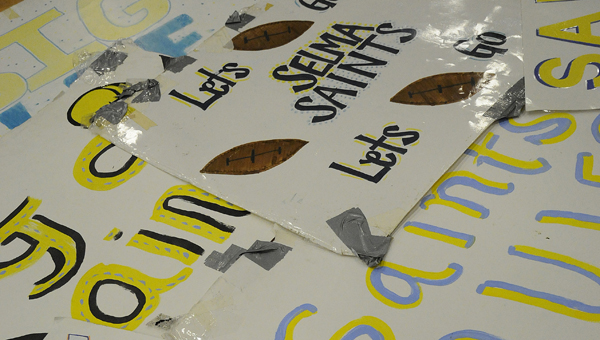 Dozens of cheerleading signs the Selma High School cheerleaders have made in the past are laid out as examples as the girls got ready to make their first football signs of 2014. — Daniel Evans

Look around any football game or high school gym, and you’re more than likely to see a few well-made spirit signs urging the home team to victory. Although, they are often overlooked, area cheerleaders put a lot of time and effort into making the signs.

“It’s a long process, because you have to have paint,” Pettaway said. “You have to bring the paint in and paint them two days before because they have to dry. It’s not good to paint those the day of the game, because they won’t have time to dry. You have to make sure they’re dry.”

Around the county, many of the signs are done in a similar style. Pettaway said it is a collaborative effort amongst the team to get the sign done.

“You just get your girls together and normally the more artistic girls will step up and say, ‘OK, I’ll write,’” Pettaway said. “So, it’s really more of a collaborative effort, teamwork.”

While the signs take a lot of time and effort on the girls’ part, Meadowview Christian’a cheer coach Kasey Burton said the cheerleaders enjoyed being able to make the signs.

“They do enjoy doing it because it’s kind of a break from the normal practice routine,” Burton said. “They get to do something fun and interact with each other and be silly in a sense, but still work on cheerleading stuff. It’s kind of a downtime for them.”

Beyond planning and drawing out how a sign will look, Pettaway said special paint and paper were needed to make a good breakaway sign for a football game.

“For an actual game, that process is different, even with the break-through,” Pettaway said. “With a break-through, I can get butcher paper, and I can possibly tape it to a pole and get someone to hold it. Now they actual print signs. With the printing process that’s expensive. It’s less of a hassle, but its more expensive.”

Often, cheerleading squads will dedicate several hours split between two or three practices to be sure to get the perfect run-through sign. However, Patricia Farrior, Selma High School’s cheer coach, said it was easier to use the preprinted run-through signs.

Not only are the preprinted run-throughs reusable, Farrior said the uniformity they brought to the team was nice.
“The permanent break-through, the fabric break-through, we actually have the flags to match, so it’s a set,” Farrior said. “You have your victory flags, and your flags SHS the girls run with after a touchdown. It matches the break-through.”

The signs are not only a way to help the cheerleaders bond, but they serve as the cheerleading squad’s way of supporting the football team.

“I think it really helps the football players,” Farrior said.

“Once they’re out there playing and they look up and see signs. When they see that it motivates them, because they feel like the cheerleaders are behind them and the school is behind them.”

If signs don’t travel with the team to a game, or aren’t made for a week, Farrior said it was something the players definitely noticed.

“If they don’t see the signs, they’ll say “Mrs. Farrior, y’all didn’t put any signs up? Y’all didn’t bring signs?” So, they look forward to it. It motivates them. I think it gives them the go ahead to keep moving.”