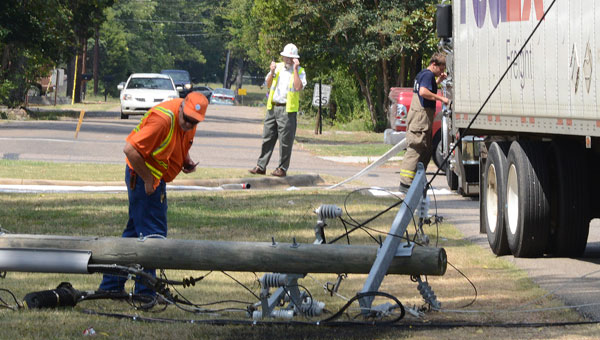 A Fed-Ex semi snagged a phone line on above 6th Avenue late Friday morning, bringing down one power pole and cutting power to a large portion of town.

The incident, which cut power to Selma High School and Payne Elementary School as well as street lights on Highland Avenue, occurred shortly after 11 a.m. Friday after the truck had turned off of Broad Street on to 6th Avenue next to the Selma City Schools office.

The driver of the truck was unhurt, and members of the Selma Fire Department extinguished brush fires that burned briefly both sides of the road.

While one power pole was left lying on the ground, another was snapped but suspended by the power lines.

“It looks like he caught one of the lower lines on the pole — which is usually a phone line — and when he snatched it, it just brought everything down,” said Steve Mothershed, engineering supervisor with Alabama Power. “We have to close everything off for a while before we can get these poles up and new lines in.”

Acting Selma Superintendent of Education Dr. Larry DiChiara said activities have been limited at both schools, but that classes would resume once power had been restored.

Mothershed estimated the road would be blocked for 3 or 4 hours as crews install new power poles.

“If there was just one pole damaged, we would probably let traffic through and just stay to one side,” Mothershed said. “But with two pole broken, we have to shut the road down.”

DiChiara said power was rerouted to the schools less than one hour after it went out, and power was restored to the entire affected area by 5 p.m.

Seven arrested in protest in Montgomery

MONTGOMERY — Police arrested seven people — including the wife of state Sen. Hank Sanders — at the Alabama Capitol after... read more