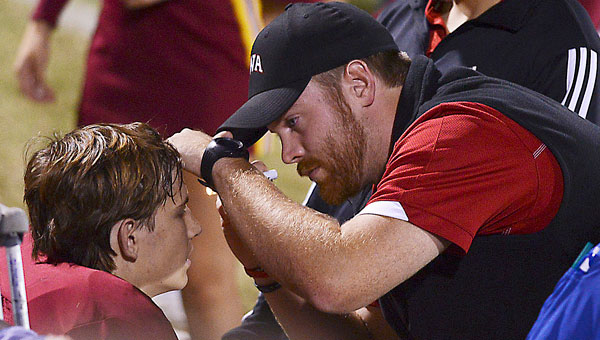 As research on concussions continues to expand, so does the protocol needed for an athlete to get back on the field after a head injury.

Years ago, helmet-to-helmet hits were thought of as just another play in football, but the discovery of chronic traumatic encephalopathy¬ — a degenerative disease that is commonly linked with head injuries — has had ripple effects at every level of the game. Rules have been changed, outlawing hits to the head, and players are being taught safer ways to play, like “Heads Up football” — which stresses the importance of now lowering the head while tackling.

But in the high-speed game of football, concussions still happen.

“Nobody knows exactly all the answers,” said Brad Montgomery, head athletic trainer and instructor at the University of West Alabama. “This is an evolving injury that has really not had the forefront until the last couple of years with the evidence that it may have a relationship with CTE that some of these older NFL players are showing. We don’t know 100 percent if it is correlated but preliminary wise it looks like it is.”

The trainers at West Alabama service around 40 high schools around the state, including Meadowview Christian, Selma, Morgan Academy and Ellwood Christian as well as the college’s own athletes.

When a concussion takes place, the athletic trainers go through a protocol process that begins with a resting period that lasts until 24 hours pass without symptoms. Once that time passes, athletes are put through a concussion test that they must pass when compared to their baseline scores — which are accumulated before the season.

At one time, a dizzy feeling in a football game was referred to as “getting one’s bell rung”, but Montgomery said that’s no longer the case. Any head injury with concussion like symptoms is typically diagnosed as a concussion.

“Nobody has the same set of symptoms with these concussions,” Montgomery said. “That’s what makes it so tough.”

The Alabama High School Athletic Association — which oversees public sports in the state — has a straightforward concussion policy. The policy reads “any student athlete who exhibits signs, symptoms or behaviors consistent with a concussion shall be removed from the contest and shall not return to play until a medical release is issued by a medical doctor.”

The Alabama Independent School Association, which oversees many private school sports, has a similar policy. In both association’s coaches are required to undergo concussion training, which is required by a 2011 state law that focused on reducing head injuries.

The law reads: “Each sports or recreational organization governing body shall ensure that coaches receive annual training to learn how to recognize the symptoms of a concussion and how to seek proper medical treatment for a person suspected of having a concussion.”

Montgomery said a player staying in a game after sustaining an injury or not reporting it is extremely dangerous.

“That’s the dangerous part,” Montgomery said. “It can lead to permanent problems or prolonged symptoms. We’ve had athletes that have missed extensive periods of time where they haven’t told us about it or reported the symptoms and they have kind of masked what they are doing where they can get back on the field.”

Montgomery estimated that his staff diagnoses about 10 concussions a year for UWA athletes.