Dixie Flips compete in first meet of the season 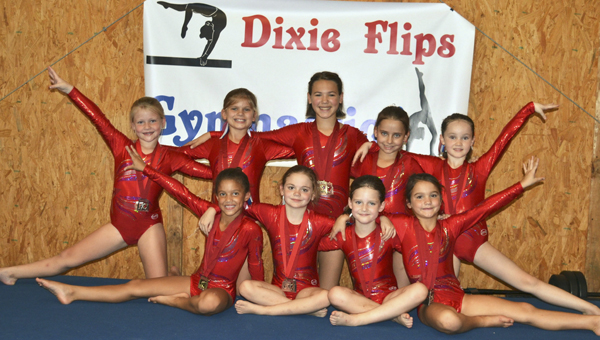 Selma’s Dixie Flips Gymnastics team competed in their first meet of the 2014 season in Montgomery at the Judge’s Cup August 16th and 17th.

On floor, McHugh took first with a 9.325 and Montoro came in seventh.  In all-around, McHugh was fourth and Montoro was seventh.

Ruth Stevens, Sr. A division, placed third on vault with a 9.05, fifth on bars, first on beam with a 9.2, second on Floor and fourth All Around.

Evey Craig, the only level 3 gymnast placed seventh on vault, eighth on bars, fourth on beam, second on floor and fifth in all-around.

Sarah Lloyd Free, the only level 5 gymnast placed first on vault, fourth on bars, first on beam, first on floor, and second all-around.

The girls travel back to Montgomery in September for the Festival of Stars meet. For class information, contact Tracey Craig at 334-431-0041.

Southside-Keith seems to always come down to the wire

Southside quarterback Scott Cole takes a snap in last week’s game against Selma. Cole is expected to get the start... read more