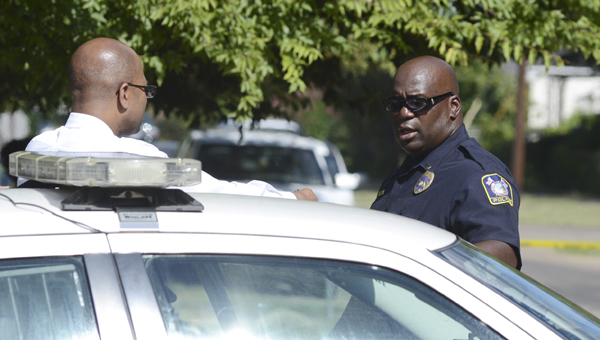 Selma Police have learned that an ongoing conflict between residents in the George Washington Carver Homes area and 1500 block Philpot Avenue residents could have led to Tuesday’s afternoon shooting. Police have yet to learn the details of the conflict, but suspect the conflict may be tied to a criminal element.

“It could be gang related,” said Lt. Curtis Muhannad, with Selma Police. “It could be drug related.”

Selma Police responded to a call concerning the shooting at 2:40 p.m. Tuesday.

When they arrived on the scene, they learned a 15-year-old female was shot in the left foot, and the 18-year-old male was shot in the jaw, while sitting on the female victim’s house porch on 1500 Philpot Avenue. The incident occurred roughly a block away from both Payne Elementary School and Gospel Tabernacle Church.

Muhannad said the shots reportedly rung out from a white Ford Crown Victorica possibly filled with people from the GWC homes area, according to the witnesses’ statements.

Police were able to locate a car matching the given description Tuesday in an alley near the GWC Homes area with 15 spent rounds inside of the vehicle.

Both victims were sent to the Vaughn Regional Medical Center’s emergency room following the shooting.

The female victim has been released from the Vaughn Regional Medical Center’s ER, but Selma Police have not received an update on the male victim at this time.

“Anytime a shooting occurs at 2:40 p.m., during the time when schools are getting let out and more kids and starting to walk home, it’s devastating to our community and the police department,” Muhannad said. “This is something that the Selma Police Department is prepared to investigate to the fullest.”

Only three members of the Selma City Council took part in a called meeting Tuesday to hear a report from... read more