Southside-Keith seems to always come down to the wire 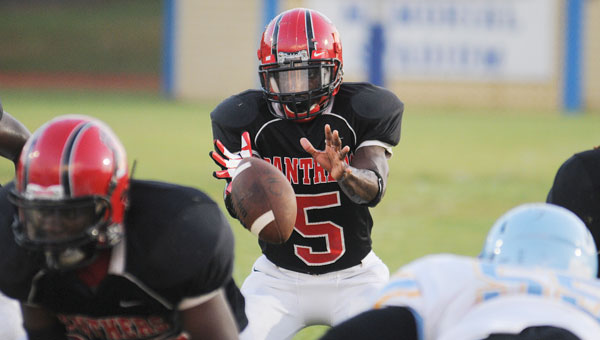 Southside quarterback Scott Cole takes a snap in last week’s game against Selma. Cole is expected to get the start for the Panthers again this week versus Keith as starting quarterback Khamari Gibbs is likely to miss the game with a hamstring injury. (Daniel Evans | Times-Journal)

While other rivalries in the county get the recognition, Keith versus Southside has quietly become one of the best annual games.

Four of the last six times the Bears (0-0) and Panthers (0-1) have met, the game has been decided by one score of less. Going into Friday night’s showdown, Southside head coach Daniel Flowers is expecting another close battle.

“I expect it to be a close ball game,” Flowers said. “I think either way there is going to be less than 20 points scored by either team. I don’t think there will be a lot of points scored.”

Last season, Khamari Gibbs’ touchdown run with 3:16 remaining capped an 18-14 Southside comeback win that gave the Panthers their first win in the series since 2009.

Gibbs’ health is one of the biggest question marks going into Friday’s game, as the junior quarterback sat out Southside’s opening loss to Selma. Flowers said the quarterback is not expected to play this either, as a nagging hamstring injury has not had the required time to heal.

If Gibbs does sit, Scott Cole will get his second straight start for the Panthers.

Flowers said he has a lot of confidence in Cole and that the offense will only have to be slightly tweaked with him at quarterback.

“We can’t make Scott be Khamari,” Flowers said. “Scott just has to be Scott.”

Last week against Selma, the Panthers ran several bubble screens while Cole was in the game and they proved to be effective. Flowers said the plan is to once again utilize Cole where the quarterback is most effective. Cole left last Friday’s game in the third quarter with cramps, but will play this week, Flowers said.

Keith will be offiicially kicking off its season Friday.

The Bears won a jamboree game Friday at Autaugaville 24-2. As usual, Keith will try to wear down the Panthers using its vaunted Wing-T rushing attack.

Deanthony Griffin is expected to get the start at quarterback for the Bears.